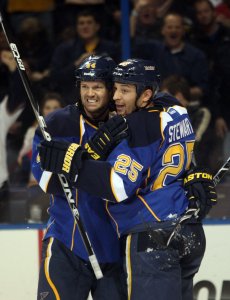 Jason William Arnott (born October 11, 1974) is a professional ice hockey centre for the Washington Capitals of the National Hockey League. He began his NHL career with the Edmonton Oilers in 1993–94 after being selected seventh overall in the 1993 NHL Entry Draft and was named to the NHL All-Rookie Team. A two-time NHL All-Star, Arnott won the Stanley Cup with the New Jersey Devils in 2000, scoring the championship-winning goal in the second overtime of game six. Arnott also played for the Dallas Stars before joining the Predators in 2006. On June 19, 2010 Arnott was traded back to the New Jersey Devils in exchange for forward Matt Halischuk and a second-round pick in the 2011 NHL Entry Draft. On February 28, 2011 Arnott was traded to the Washington Capitals in exchange for center David Steckel and a second-round pick in the 2012 NHL Entry Draft.

Arnott grew up playing minor hockey for his hometown Wasaga Beach Stars of the OMHA. In his Bantam year, Arnott signed with the Stayner Siskins Jr.C. club of the OHA for the 1989-90 season.

In 1990-91, Arnott played Jr.B. hockey for the Lindsay Century 21 Bears of the OHA. Later that year, Arnott was selected in the 1st round (16th overall) of the 1991 OHL Priority Selection by the Oshawa Generals. The OHL Draft was held that spring in Kitchener, Ontario.

FULL ARTICLE AT WIKIPEDIA.ORG
This article is licensed under the GNU Free Documentation License.
It uses material from the Wikipedia article "Jason Arnott."