Sports News // 2 years ago
Reds aim to keep Giants from making positive move
The San Francisco Giants, still hanging around in the National League West race, are coming off a meaningful series against a big rival that turned out very good. But not quite good enough.

MLB // 2 years ago
Astros' Verlander faces Tigers for first time
HOUSTON -- After compiling 380 starts over 12-plus season with the Detroit Tigers, Houston Astros right-hander Justin Verlander will face his former team for the first time on Sunday at Minute Maid Park.

MLB // 2 years ago
Scherzer, Nationals wrap up series with Giants
WASHINGTON -- It has been a rough week for the Washington Nationals' starting rotation. 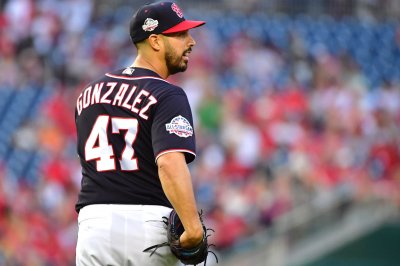 Iván Rodríguez Torres (born November 30, 1971, in Manatí, Puerto Rico), nicknamed "Pudge" and "I-Rod", is a Major League Baseball catcher for the Washington Nationals. In his career, he has played for the Texas Rangers (on two different tours, comprising the majority of his career), Florida Marlins, Detroit Tigers, New York Yankees, Houston Astros, and Washington Nationals.

He is ranked as one of the greatest catchers in the history of the major leagues. Rodríguez was awarded the AL MVP award in 1999.

Rodríguez won the World Series with the Marlins in 2003, and also played in the 2006 World Series while with the Tigers. On June 17, 2009, Rodríguez set a MLB record by catching his 2,227th game, passing Carlton Fisk.

FULL ARTICLE AT WIKIPEDIA.ORG
This article is licensed under the GNU Free Documentation License.
It uses material from the Wikipedia article "Ivan Rodriguez."
Back to Article
/