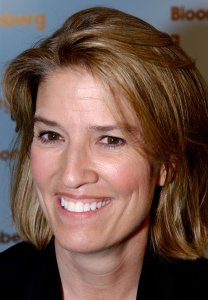 TV // 4 years ago
Yara Shahidi, Greta Van Susteren to guest co-host 'View' next week
ABC has announced the guest hosts scheduled to fill in for Sara Haines on "The View" next week while the permanent panelist is on maternity leave.

TV // 5 years ago
Bill O'Reilly forced out at Fox News
Fox News announced Wednesday that Bill O'Reilly, who has worked for the cable network since its inception in 1996, won't return to its top-rated show.

U.S. News // 5 years ago
Woman pilot gets Arlington funeral for all WASPs
Elaine Danforth Harmon, who died in April, was finally buried in Arlington National Cemetery on Wednesday, 70 years after she served her country.

Business News // 5 years ago
Ailes quits as Fox News chief amid sexual harassment claims by Kelly, Carlson
After days of speculation about his future with the network, Fox News Channel chairman and CEO Roger Ailes has resigned his position effective immediately.

Greta Van Susteren (born June 11, 1954) is an American journalist and television personality on the Fox News Channel, where she hosts On the Record w/ Greta Van Susteren. A former criminal defense and civil trial lawyer, she appeared as a legal commentator on CNN co-hosting Burden of Proof with Roger Cossack from 1994 to 2002, playing defense attorney to Cossack's prosecutor.

Van Susteren was born in Appleton, Wisconsin, and is of Dutch, French and German ancestry on her paternal side.

Van Susteren's sister, Lise, is a forensic psychiatrist in Bethesda, Maryland. In 2006, Lise was a candidate for the Democratic nomination for U.S. Senate. Her brother, Dirk Van Susteren, was a journalist and long-time editor of the Vermont Sunday magazine, jointly published, until folding in 2008, by the Rutland Herald and the Barre-Montpelier-Times Argus. Van Susteren's father, Urban Van Susteren, an elected judge, was a longtime friend of U.S. Senator Joseph McCarthy, and a campaign strategist for him, although Urban later broke with him.

FULL ARTICLE AT WIKIPEDIA.ORG
This article is licensed under the GNU Free Documentation License.
It uses material from the Wikipedia article "Greta Van Susteren."