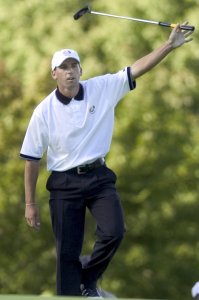 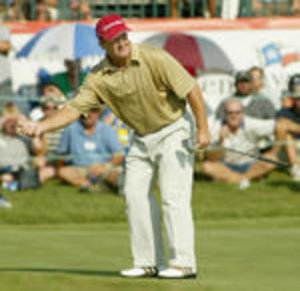 It feels good to come in with a major win

In the alternate shot, to shoot an 8-under is really good

The first two days, I didn't hit the ball all that great

Funk was born in Takoma Park, Maryland. He graduated from the University of Maryland, College Park in 1980 with a degree in law enforcement. He turned professional in 1981, but worked as a golf coach at his alma mater from 1982 to 1988; he did not becoming a member of the PGA Tour until 1989. Funk was a member of the United States teams at the 2003 and 2005 Presidents Cup and the 2004 Ryder Cup; he received some criticism in 2004 for opting out of The Open Championship, a major, despite having qualified. He played instead in that week's B.C. Open, a much less prestigious event, but one which also offered Ryder Cup ranking points.

Since turning 50 in June 2006, Funk has been eligible for Champions Tour events and debuted in the 2006 U.S. Senior Open. When he turned 50, he still featured in the top 50 of the Official World Golf Rankings. He won a further PGA Tour tournament in 2007 after his senior debut, becoming only the second over-50 player to win on the PGA Tour in over thirty years, although his win came at the Mayakoba Golf Classic at Riviera Maya-Cancun, which was an alternate event to the WGC-Accenture Match Play Championship, so none of the world's top 64 ranked players were in the field. By winning the first Mayakoba Golf Classic, Funk became the first man to win a PGA Tour event held in Mexico.

FULL ARTICLE AT WIKIPEDIA.ORG
This article is licensed under the GNU Free Documentation License.
It uses material from the Wikipedia article "Fred Funk."
Back to Article
/