KAUPULEHU-KONA, Hawaii, Jan. 17 (UPI) -- Rocco Mediate made seven birdies and an eagle Friday to shoot a 9-under-par 63 and take the lead at the Mitsubishi Electric Championship.

In the opening event on the Champions Tour this year, Mediate thought seriously about skipping the event because of pain in his left hip.

Instead, he took a big step toward what would be his third win on the over-50 circuit.

"Almost didn't play," Mediate said. "Left hip is really bothering me. Chiropractors here are exceptional. I went out and told myself to try and play. It actually got better as the round went on."

Dan Forsman, who won this event two years ago, shot a 64 despite putting his tee shot in the water at the par-3 eighth. That put him in second place by himself while Fred Couples, Steve Elkington, Fred Funk and Tom Pernice Jr. were all at 65.

Defending champion John Cook was tied for 17th after shooting a 69. 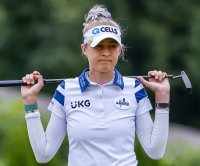