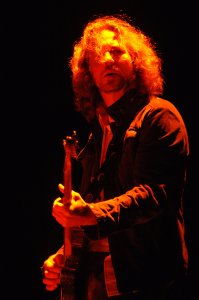 Music // 1 month ago
2022 music festivals: What to expect
Coachella, Bonnaroo, Summerfest, Lollapalooza and many more music festivals are set to rock audiences with star-studded lineups across the U.S. in 2022.

The Clearwater Concert: Creating the Next Generation of Environmental Leader

When I had a child, everyone was telling me that I was going to see the world through her eyes and everything was going to get this nice gloss to it

Just to clarify ... we support the troops. We're just confused on how wanting to bring them back safely all of a sudden becomes non-support

The folks at Jim Beam know how to throw down, and they're all about the party

Eddie Vedder (born Edward Louis Severson III; December 23, 1964) is an American musician who serves as the lead singer and one of three guitarists for the American rock band Pearl Jam. Vedder left the Southern California music scene and moved to Seattle, Washington in 1990 to join Pearl Jam where he rose to fame amid the grunge movement of the early 1990s. He is notable for his "golden baritone" vocal style, and is considered a cultural icon of alternative rock. He has also been involved in other music outside of Pearl Jam, including soundtrack work and contributions to albums by other artists. In 2007, Vedder released his first solo album in the form of the soundtrack for the film Into the Wild (2007).

Vedder was born Edward Louis Severson III in the Chicago suburb of Evanston, Illinois, the son of Karen Lee Vedder and Edward Louis Severson, Jr. His father was a lounge musician. His parents divorced in 1965, when Vedder was one-year-old. His mother soon remarried a man named Peter Mueller, an attorney, and Vedder was raised believing that Mueller was his biological father. His adopted name became Edward Mueller. While living in Evanston, Vedder's family fostered seven younger children in a group home.

In the mid-1970s, the family, including Vedder's three younger half-brothers, moved to San Diego County, California. It was at this point that Vedder, who had received a guitar from his mother on his twelfth birthday, began turning to music as a source of comfort. He particularly found solace in The Who's 1973 album, Quadrophenia. He said, "When I was around 15 or 16...I felt all alone...I was all alone—except for music." His mother and Mueller divorced when Vedder was in his late teens. His mother and brothers moved back to the Chicago area, but Vedder remained with his stepfather in California so he would not have to change high schools.

FULL ARTICLE AT WIKIPEDIA.ORG
This article is licensed under the GNU Free Documentation License.
It uses material from the Wikipedia article "Eddie Vedder."