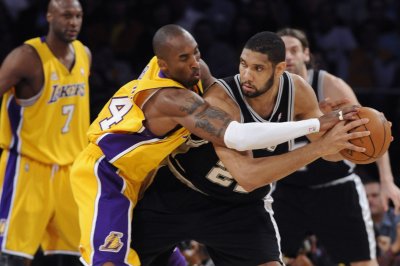 College Basketball // 2 years ago
Purdue, Texas Tech coaches have history
Neither Purdue coach Matt Painter nor Texas Tech coach Chris Beard said they believe their previous meeting will have any impact when their teams face off in the Sweet 16 of the NCAA Tournament on Friday night in Boston.

The second half, because we could control the boards a little better, we were able to run

Other than our inability to hit free throws (16-of-28), that was one of our best games we've played in a while

We softened up and we got stagnant (in the second half)

Eddie Sutton (born March 12, 1936) is an American former college head coach with 36 years of Division I basketball coaching experience at Creighton, Arkansas, Kentucky, Oklahoma State (his alma mater), and the University of San Francisco. Sutton became the first coach to take four schools to the NCAA tournament, and he reached the Final Four with Arkansas in 1978 and Oklahoma State in 1995 and 2004. He is one of only eight major college men's basketball coaches to have over 800 career wins.

Eddie Sutton was born in Bucklin, Kansas. He played for Oklahoma State (known as Oklahoma A&M until his senior year of 1957–1958) under legendary coach Henry Iba. While at Oklahoma A&M Sutton became a member of Sigma Chi fraternity.

In his college coaching career, Sutton was the head coach of Creighton, Arkansas, Kentucky, Oklahoma State,and University of San Francisco. He has the rare distinction of having taken two schools (Arkansas and Oklahoma State) to the Final Four, and was the first coach to lead four schools to the NCAA tournament.

FULL ARTICLE AT WIKIPEDIA.ORG
This article is licensed under the GNU Free Documentation License.
It uses material from the Wikipedia article "Eddie Sutton."
Back to Article
/