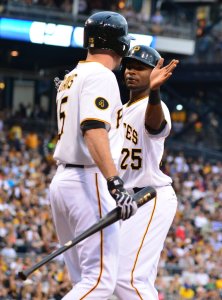 Sports News // 6 years ago
Chicago Cubs set for Pittsburgh after beating Milwaukee Brewers
MILWAUKEE -- The Chicago Cubs wrapped up the 2015 regular season on a high note Sunday, finishing off a three-game sweep of the Milwaukee Brewers with a 3-1 victory at Miller Park.

Sports News // 6 years ago
Chris Denorfia's walkoff homer in 11th lifts Chicago Cubs past Kansas City Royals
CHICAGO -- Chris Denorfia and the Cubs once again displayed a flair for the dramatic on Monday.

Sports News // 6 years ago
Washington Nationals' Max Scherzer flirts with no-hitter in win
WASHINGTON -- On June 20 right-hander Max Scherzer came within one out of a perfect game, settling for a no-hitter against the visiting Pittsburgh Pirates.

Haren, who is of Irish and Mexican descent, graduated from Bishop Amat High School in La Puente, CA in 1998. He attended Pepperdine University in Malibu, CA on a baseball scholarship. It was there that Haren teamed up with Noah Lowry, a left-handed pitcher just one month younger than Haren, to form the best starting pitching duo in the West Coast Conference. In the 2001 season, Haren posted a 2.22 ERA in 17 starts, and Lowry posted a 1.71 ERA in 18 starts. The teammates (and roommates) skipped their senior seasons, and Lowry was taken in the 1st round (30th overall) by the San Francisco Giants and Haren was taken in the 2nd round (72nd overall) by the St. Louis Cardinals in the 2001 Major League Baseball Draft.

Haren made 28 starts in A-ball in 2002 for Peoria and Potomac, finishing with a combined ERA of 2.74. He started 2003 in Double-A Tennessee, but was promoted after eight starts to Triple-A Memphis.

FULL ARTICLE AT WIKIPEDIA.ORG
This article is licensed under the GNU Free Documentation License.
It uses material from the Wikipedia article "Dan Haren."