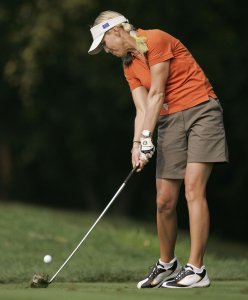 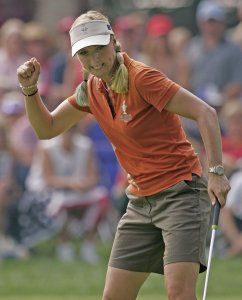 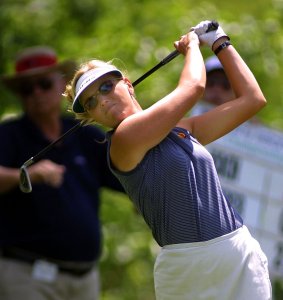 Very nice thing I have going with my putter right now

Carin Koch née Hjalmarsson (born 23 February 1971) is a Swedish professional golfer who plays mainly on the U.S. based LPGA Tour and is also a member of the Ladies European Tour.

She is friendly with golf icon Gary Player and plays in the Gary Player Invitational charity golf series to help raise money for childrens causes around the world.

Carin Koch had a successful amateur career. She was Swedish Girl Champion in 1988 and played in the Junior and Senior European Amateur Team Championships as a member of the 1985-91 Swedish national amateur team. She was also 1990 European Team Junior Champion. Koch enrolled at the University of Tulsa and was named Second-Team All-American in 1990 and Scholar All-American in 1991. Between 1987 and 1991 she played eight times on the Swedish Telia Tour as an amateur, never finishing outside the top ten. She turned professional in 1992.

FULL ARTICLE AT WIKIPEDIA.ORG
This article is licensed under the GNU Free Documentation License.
It uses material from the Wikipedia article "Carin Koch."