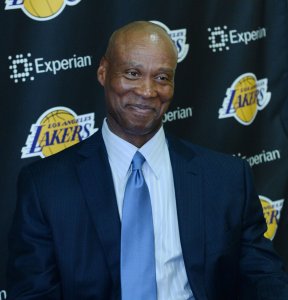 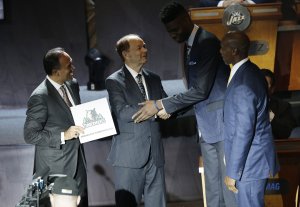 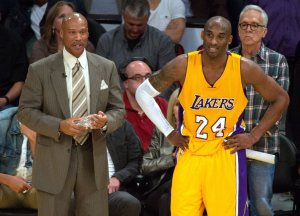 Sports News // 6 years ago
Kobe Bryant scores 35 in Los Angeles Lakers' loss to Houston Rockets
With the outcome in the balance, James Harden erupted in the fourth quarter and carried the Rockets to a 130-110 victory over the Lakers on Sunday.

NBA // 6 years ago
Clippers sink Lakers for 11th straight time
They share an arena, but the distance and direction of the Los Angeles Clippers and Los Angeles Lakers couldn't be any further apart.

NBA // 6 years ago
Lakers' D'Angelo Russell is feeling heat from all directions
The Los Angeles Lakers won a basketball game on Wednesday night but nobody wanted to rejoice about the rare victory.

Byron Antom Scott (born March 28, 1961, in Ogden, Utah) is a retired American National Basketball Association player and current head coach of the NBA's Cleveland Cavaliers. He was formerly the head coach of the NBA's New Jersey Nets and New Orleans Hornets. He attended Arizona State University. He was an important component of the Los Angeles Lakers championship teams of the mid-to-late 1980s. Scott grew up in Inglewood, California and played at Morningside High School, in the shadow of what was then the Lakers' home arena, The Forum.

Selected by the San Diego Clippers with the 4th pick of the 1983 NBA Draft, he was traded to the Los Angeles Lakers in 1983 in exchange for Norm Nixon. During his playing career, Scott suited up for the Lakers, Indiana Pacers and Vancouver Grizzlies. Scott was a key player for the Lakers during the Showtime era, being a starter alongside Magic Johnson, James Worthy, and Kareem Abdul-Jabbar. He played for the Lakers for 10 consecutive seasons (1983–1993). During that time he won 3 NBA championships (1985, 1987, 1988). As a rookie, he was a member of the 1984 all-rookie team, averaging 10.6 PPG in 22 MPG. He led the NBA in three-point field goal percentage (.433) in 1984-85. 1987-88 was his best season, leading the world champion Lakers in scoring, averaging a career-best 21.7 ppg, and in steals (1.91 spg). Although he was an excellent player and an integral part of one of the greatest teams in NBA history, Byron Scott was never selected to play in the NBA All-Star game. He was the Lakers' starting shooting guard from 1984 until 1993. In 1996-97, the last year of Scott's playing career in the NBA, he went back to the Lakers and proved to be a valuable mentor for a team led by Kobe Bryant and Shaquille O'Neal.

FULL ARTICLE AT WIKIPEDIA.ORG
This article is licensed under the GNU Free Documentation License.
It uses material from the Wikipedia article "Byron Scott."