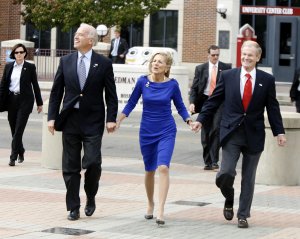 Voices // 1 year ago
Promises kept? Trump's appeal to rural voters will be key in 2020 race
How strong supporters of Donald Trump in the 2016 election vote in 2020 will depend on whether the president has delivered on the promises he made to help them.

U.S. News // 2 years ago
Families of Groveland Four renew hope for pardon after Florida lawmakers join effort
Family members of the Groveland Four have hopes a governor's pardon will be issued in one of the most controversial cases in Florida history.

U.S. News // 2 years ago
Florida elections supervisor Brenda Snipes resigns amid heavy criticism
Brenda Snipes, the supervisor of elections in Broward County, Fla., who was at the center of the county's recount controversy, has resigned her position.

U.S. News // 2 years ago
Hand recount ordered in tight Florida Senate race
Florida will conduct a hand recount in the Senate race after machine recounts left the two separated by less than 0.25 percent of the vote.

U.S. News // 2 years ago
Florida county forced to restart recount after machine malfunction
Broward County Supervisor of Elections Brenda Snipes said Tuesday she was considering not running for re-election in 2020.

HBO is so pleased to have Time Warner Cable join this year as we continue our history of presenting the classics on the big screen. There is no better place for New Yorkers to be on Monday nights during the summer than in Bryant Park

Since the rovers are solar-powered, the dust in the atmosphere is extremely important to us

On several diplomatic occasions when Bob Levinson's name has been brought up to Iranian officials, the standard answer is, 'We don't know anything about that,

Clarence William "Bill" Nelson (born September 29, 1942) is the senior United States Senator from the state of Florida. A member of the Democratic Party, he is a former U.S. Representative and former Treasurer and Insurance Commissioner of Florida. He is a leader in air and space policy, and in 1986, he became the second sitting member of the United States Congress to fly in space.

Born in Miami, Nelson attended the University of Florida before transferring to Yale University. He went on to receive his law degree from the University of Virginia. In 1965, he joined the U.S. Army Reserve; he served on active duty from 1968 to 1970, attaining the rank of captain, and left the following year. Nelson was admitted to the Florida bar in 1968, and began practicing law in Melbourne in 1970. In 1971, he worked as legislative assistant to Governor Reubin Askew.

In 1972, Nelson was elected to the Florida House of Representatives. He won re-election in 1974 and 1976. Nelson was elected to the U.S. House of Representatives in 1978. He served in the U.S. House from 1979 to 1991. In January 1986, he flew as a Payload Specialist on the Space Shuttle Columbia. After a failed gubernatorial race in 1990, he successfully ran for the office of Treasurer and Insurance Commissioner of Florida in 1994 and served for six years. In 2000, Nelson ran as a Democrat for the U.S. Senate seat vacated by retiring Republican Senator Connie Mack. In the Senate he is generally considered a social moderate and economic liberal. He was re-elected in 2006 with 60 percent of the vote.

FULL ARTICLE AT WIKIPEDIA.ORG
This article is licensed under the GNU Free Documentation License.
It uses material from the Wikipedia article "Bill Nelson."
Back to Article
/