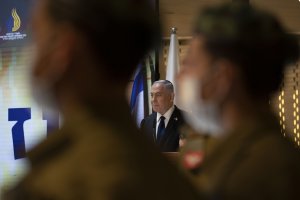 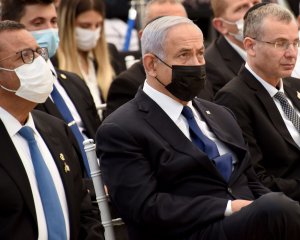 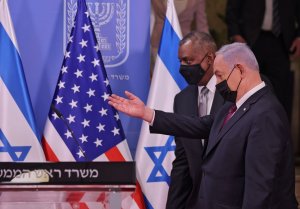 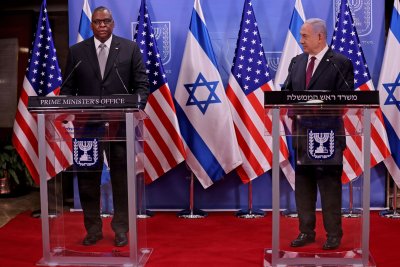 World News // 1 week ago
Not optimistic, Israeli president gives Netanyahu mandate to form coalition gov't
Israeli Prime Minister Benjamin Netanyahu, while he faces a political corruption trial, is getting the first shot at trying to form a new coalition government -- as he was handed the mandate by President Reuven Rivlin.

Our two peoples are waiting and yearning for this moment. I know how hard it is. I know there are many constraints and doubts. We can overcome them only if we sit together or send our envoys. We can cross this barrier and give a future of peace not only to our peoples but also to the entire region. I want to see a region of democracy and peace, and I would like to wish you peace

We appreciate a great deal our French friends, and I will answer them after we consider matters

It is important that the whole world knows that the people of Israel and its friends in the world stand together in their loyalty to Jerusalem and our heritage, are determined in our positions, stand up for our security, and extend our hand for a real peace with our neighbors

Israel is the cradle of our common civilization, crucible of our moral ideals. The Jewish state was founded on these eternal values. This is why Israel's more than 1 million Muslim citizens enjoy full democratic rights

Netanyahu is the first and only Israeli prime minister born in Israel after the State of Israel's foundation. Netanyahu joined the Israeli Defense Forces in 1967 where he served as a team leader in the Sayeret Matkal special forces unit, taking part in many missions including the hostage rescue mission from the hijacked Sabena Flight 571 in 1972. He fought in the Yom Kippur War in 1973 and achieved the rank of captain before being discharged. Netanyahu served as the Israeli ambassador to the United Nations from 1984 to 1988, member of the Likud Party, and was Prime Minister from June 1996 to July 1999.

Netanyahu withdrew from politics after a corruption scandal related to gifts from a government contractor. In 2002 he returned as Foreign Minister (2002–03) and Finance Minister (2003 – August 2005) in Ariel Sharon's governments, but he departed over disagreements regarding the Gaza Disengagement Plan. He retook the Likud leadership on December 20, 2005. In the 2006 election, Likud did poorly, winning 12 seats. In December 2006, Netanyahu became the official Opposition Leader in the Knesset and Chairman of the Likud Party. In August 2007, he retained the Likud leadership by beating Moshe Feiglin in party elections. Following the 10 February 2009 parliamentary election, in which Likud placed second and right-wing parties won a majority, Netanyahu formed a coalition government. He is the brother of Israeli Special Forces commander Yonatan Netanyahu, who died during a hostage rescue mission, and Iddo Netanyahu, an Israeli playwright.

FULL ARTICLE AT WIKIPEDIA.ORG
This article is licensed under the GNU Free Documentation License.
It uses material from the Wikipedia article "Benjamin Netanyahu."
Back to Article
/