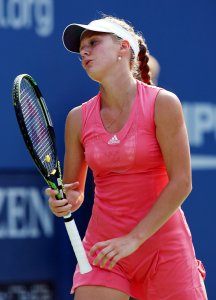 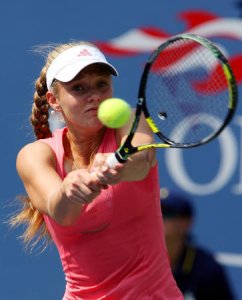 I had two match points at 5-4 40-15 (second set), and instead of going for it I started to play more cautious

I'd come to watch the Kremlin Cup with my parents from the age of six, and I never thought I'd play in this tournament

I knew I had to be really aggressive today, and it worked

Anna Djambulilovna Chakvetadze (Russian: Анна Джамбулиловна Чакветадзе; born March 5, 1987) is a Russian professional tennis player (with Georgian roots). On September 10, 2007, she reached her career-high professional singles ranking of World No. 5. She has won eight WTA Singles Titles and appeared in the 2007 US Open semifinals. As of February 21, 2011, Chakvetadze is ranked World No. 49.

She began playing tennis at the age of eight after being introduced to the sport by her mother, Natalia. She travels for tournaments with her father. She speaks both Russian and English.

Chakvetadze hit her peak of World No. 5 in 2007 after a semifinal appearance at the US Open. Also in that year, she reached the quarterfinals at the Australian Open and the French Open, both of which were career bests for those events. Four of her eight career singles titles also occurred in 2007. She ended 2010 ranked inside the top 60 at number 56. The same year, she won 1 title and her 8th overall.

FULL ARTICLE AT WIKIPEDIA.ORG
This article is licensed under the GNU Free Documentation License.
It uses material from the Wikipedia article "Anna Chakvetadze."
Back to Article
/