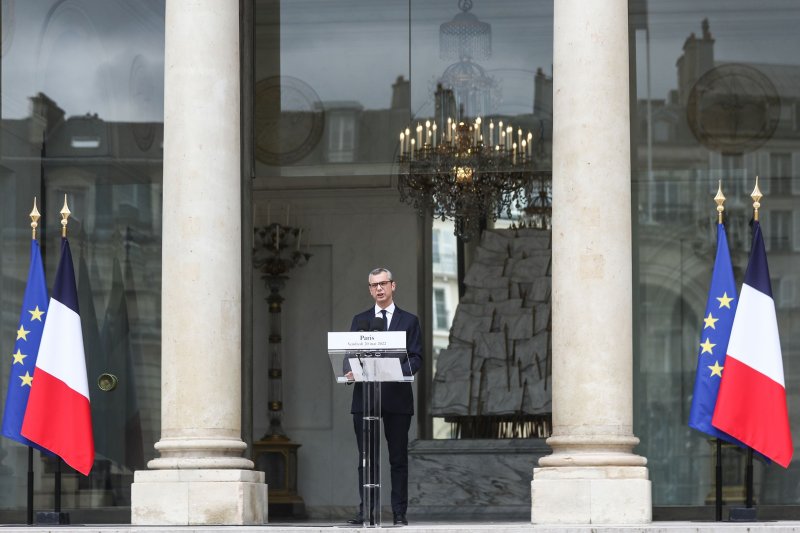 May 21 (UPI) -- French President Emmanuel Macron's chief of staff has announced a new cabinet that has gender balance, and some surprise newcomers.

Chief of staff Alexis Kolher announced the new cabinet on the front steps of the Elysee Palace on Friday. The cabinet, including the prime minister, is gender equal, 14 men and 14 women.

Among the women is Elisabeth Borne, 61, labor minister and former minister of the environment and of transportation, who Macron appointed on Monday to be prime minister -- the second woman in the country's history to hold that position. The only other woman to serve as prime minister in France was Edith Cresson, who served in the position in the early 1990s.

Borne dedicated her nomination to "all little girls" in her inaugural speech.

Many believe her appointment was meant to appeal to left-leaning voters ahead of June's legislative elections, which will determine control over Parliament and the National Assembly.

Macron was elected to a second five-year term as president last month with his far-right opponent Marine Le Pen conceding her loss.

Borne takes over after Prime Minister Jean Castex resigned on Monday in response to Macron's re-election.

Macron expressed that he wanted to appoint a woman as prime minister since his 2017 campaign, but he hasn't fulfilled that wish until now.

The cabinet includes fewer newcomers than there were during the start of his first presidential term in 2017, but also included some surprises.

"It's a gender-equal, balanced government, between those who were already ministers these past few years and new figures who were picked because they were competent and committed," Borne told the TF1 television broadcaster.

RELATED France says it will defend Sweden, Finland against attacks as they seek NATO membership

Among the surprises, Jean-Yves Le Drian, who served as foreign minister during Macron's first term in office, and previously served as defense minister, was replaced by Catherine Colonna, a career diplomat.

Colonna mediated disputes with Britain over Brexit and served as a spokeswoman for President Jacques Chirac in the early 2000s, who opposed the U.S. invasion of Iraq, and Colonna will now have to deal with instability and uncertainty from the war in Ukraine.

In another surprise, education minister Jean-Michel Blanquer, who founded his own think tank to oppose "wokism," defined as having an awareness to racial and social justice issues, was replaced by Pap Ndiaye, a prominent academic of Sengalese and French descent who led efforts to establish Black studies as a discipline in France.

Some veterans remaining in the cabinet include economy and finance minister Bruno Le Maire, and interior minister Gerald Darmanin, known for his tough stance on immigration.

World News // 5 hours ago
NATO summit: Biden pledges greater U.S. military presence in Europe to counter Russia
June 29 (UPI) -- The United States will increase its military presence in Europe, including the creation of a permanent headquarters in Poland, to help NATO stand against the Kremlin in light of Russia's invasion of Ukraine, President Jo

World News // 19 hours ago
Russia sanctions first lady Jill Biden, daughter among 25 Americans
June 28 (UPI) -- First Lady Jill Biden and her daughter Ashley Biden are two of the 25 Americans covered by Russia's latest round of sanctions, barring them from entering the country, the Russian Foreign Ministry said in a statement.