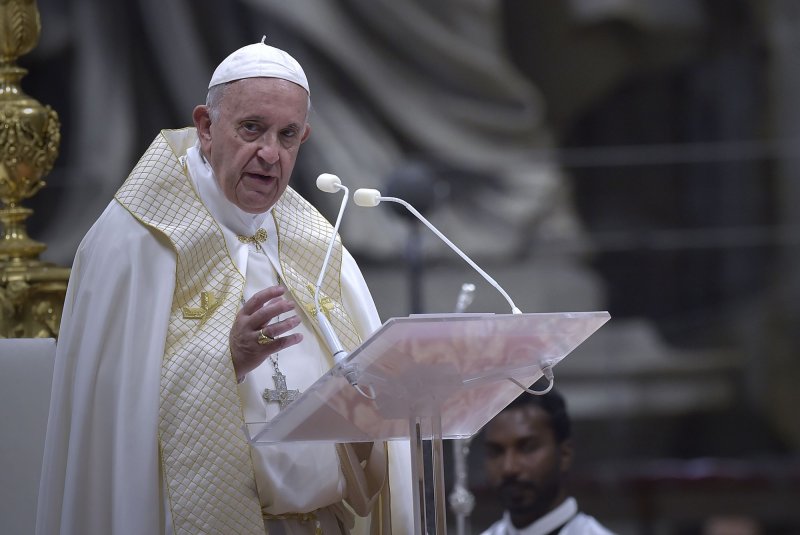 Oct. 13 (UPI) -- Pope Francis canonized five new saints, including a woman who worked as a seamstress, during a mass at the Vatican on Sunday.

"Three of them were religious women. They show us that the consecrated life is a journey of love at the existential peripheries of the world," he said of the newly canonized saints. "St. Marguerite Bays, on the other hand, was a seamstress, she speaks to us of the power of simple prayer, enduring patience and silent self-giving."

"The Christian has a deep, silent, hidden peace, which the world sees not. The Christian is cheerful, easy, kind, gentle courteous candid, unassuming, has no pretense ... with so little that is unusual or striking in his bearing that he may easily be taken at first sight for an ordinary man," he said.

Amid conflicts between Turkey and U.S. -backed Kurdish forces in Syria, Pope Francis also called for the international community to "sincerely engage, with honesty and transparency, on the path of dialogue in order to seek effective solutions."

"In particular to the beloved and martyred Syria, from where dramatic news is emerging once again regarding the fate of the people in the northeast of the country, who are forced to abandon their homes because of military action," he said.

World News // 31 minutes ago
Former U.S. military base in South Korea to become green park in heart of Seoul
SEOUL, July 1 (UPI) -- For almost 120 years, Yongsan Garrison has been off-limits to South Korean civilians -- but now the walled compound in the heart of Seoul is turning into a public park that officials say will transform the city.

World News // 10 hours ago
Xi Jinping returns to Hong Kong for first trip outside of mainland China in two years
June 30 (UPI) -- Chinese President Xi Jinping traveled to Hong Kong on Thursday to mark the 25th anniversary of its return from British rule and to inaugurate the administration of its new chief executive, John Lee.

World News // 15 hours ago
Swiss chocolate maker stops production after finding salmonella
June 30 (UPI) -- One of the world's largest chocolate producers is shutting down operations at one of its massive factories because of a salmonella outbreak, the company confirmed Thursday.

World News // 16 hours ago
China rebukes NATO for singling out Beijing in latest security threat guide
June 30 (UPI) -- China's mission to the European Union rebuked NATO on Thursday for singling out China for the first time in its latest Strategic Concept, which provides the alliance a guide to respond to security threats and challenges.

World News // 17 hours ago
Denmark 'grossly misleading' when ordering mink cull during pandemic, report says
June 30 (UPI) -- A Danish committee released a report accusing the government of making "grossly misleading" statements in the early months of the COVID-19 pandemic when ordering the country's mink population to be culled.

World News // 1 day ago
NATO summit: Biden says U.S. will support Ukraine against Russia 'for as long as it takes'
June 30 (UPI) -- Concluding the NATO summit in Spain, President Biden told reporters that the security meetings were "historic" and significant progress was made for the future of the World War II-era defensive alliance.

World News // 1 day ago
Israeli Knesset dissolves, sets 5th national elections in 4 years
June 30 (UPI) -- Israel's parliament on Thursday voted to dissolve and set new elections for November, which will be country's the fifth in less than four years, after an unsuccessful period with an experimental coalition government.
Advertisement