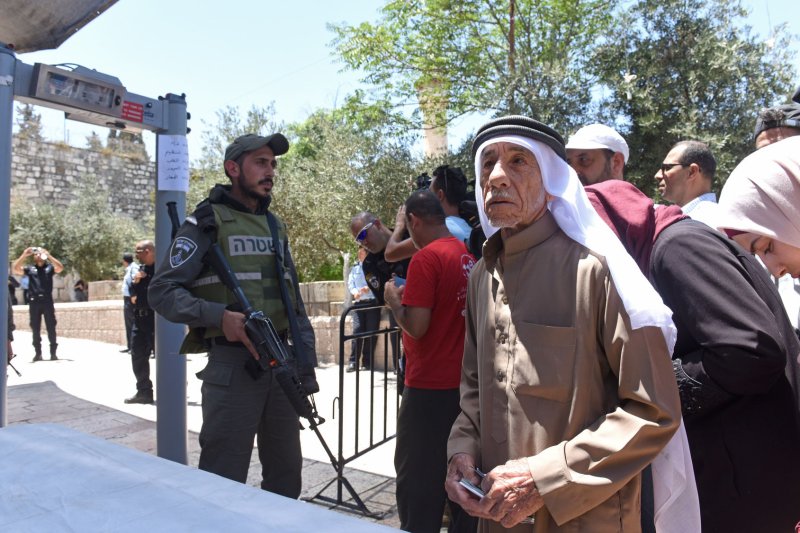 July 27 (UPI) -- Islamic leaders called on followers to return to a key Old Jerusalem holy site -- known to Muslims as Haram al-Sharif and to Jews as Temple Mount -- ending a boycott after Israel removed security measures there Thursday.

Israel added cameras and metal detectors at the site after a July 14 attack in which two Israeli officers and all three attackers were killed.

The added security measures generated backlash from the Muslim community, including protests in Jerusalem and the West Bank. Palestinian President Mahmoud Abbas suspended all contacts between the Palestinian Authority and the Israeli government last week to protest the metal detectors.

"The metal detectors and cameras that were put into place outside the Temple Mount after the terror attack ... when two officers were murdered have been removed and dismantled," Rosenfeld said in a statement.

Muslim leaders, including the Jerusalem Islamic Waqf, said worshipers are encouraged to return to the holy site.

Abbas said afternoon prayers would be held at the Al-Aqsa Mosque within the holy compound, the Wafa Palestinian news agency reported.

"The Al Jazeera network continues to incite violence around the Temple Mount. I have appealed to law enforcement agencies several times to close the Al-Jazeera office in Jerusalem," Netanyahu wrote in a statement. "If this does not happen because of legal interpretation, I will work to legislate the laws required to remove Al Jazeera from Israel."

RELATED Six dead around West Bank and Jerusalem on Friday

"All we do is report what happens. It's called journalism," he said in a post to Twitter.