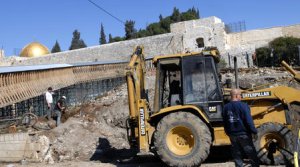 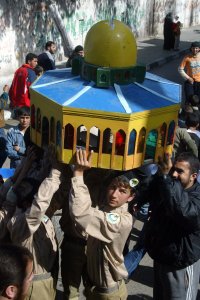 Voices // 3 years ago
Trump's Jerusalem move may inflame Mideast tensions
Donald Trump's decision to recognize Jerusalem as the capital of Israel has the potential to further inflame tensions across the Middle East.

World News // 3 years ago
Six dead around West Bank and Jerusalem on Friday
A father, his son and his daughter were stabbed to death at a home in Israel by a Palestinian terrorist on Friday evening. 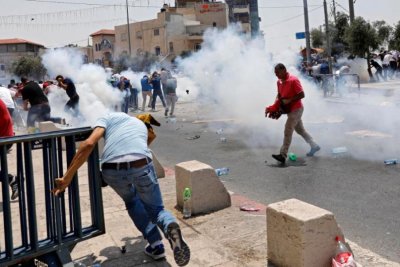 Al-Aqsa Mosque (Arabic:المسجد الاقصى, Arabic pronunciation: , al-Masjid al-Aqsa (help·info) translit: "the Farthest Mosque"), also known as al-Aqsa, is an Islamic holy place in the Old City of Jerusalem. The site that includes the mosque (along with the Dome of the Rock) is also referred to as al-Haram ash-Sharif or "Sacred Noble Sanctuary", a site also known as the Temple Mount, the holiest site in Judaism, the place where the First and Second Temples are generally accepted to have stood. Widely considered as the third holiest site in Islam, Muslims believe that Muhammad was transported from the Sacred Mosque in Mecca to al-Aqsa during the Night Journey. Islamic tradition holds that Muhammad led prayers towards this site until the seventeenth month after the emigration, when God ordered him to turn towards the Ka'aba.

According to Islamic belief, Jacob, son of Isaac, was the first to build the Mosque as a House of God. The Kaaba in Mecca was the first House of Worship to God, and the Masjid Al-Aqsa (Bayt Al-Maqdis) was the second. Originally built by Jacob and greatly expanded and renovated by King Solomon, the Mosque was destroyed twice.

The al-Aqsa Mosque was originally a small prayer house built by the Rashidun caliph Umar, but was rebuilt and expanded by the Ummayad caliph Abd al-Malik and finished by his son al-Walid in 705 CE. After an earthquake in 746, the mosque was completely destroyed and rebuilt by the Abbasid caliph al-Mansur in 754, and again rebuilt by his successor al-Mahdi in 780. Another earthquake destroyed most of al-Aqsa in 1033, but two years later the Fatimid caliph Ali az-Zahir built another mosque which has stood to the present-day. During the periodic renovations undertaken, the various ruling dynasties of the Islamic Caliphate constructed additions to the mosque and its precincts, such as its dome, facade, its minbar, minarets and the interior structure. When the Crusaders captured Jerusalem in 1099, they used the mosque as a palace and church, but its function as a mosque was restored after its recapture by Saladin. More renovations, repairs and additions were undertaken in the later centuries by the Ayyubids, Mamluks, Ottomans, the Supreme Muslim Council, and Jordan. Today, the Old City is under Israeli control, but the mosque remains under the administration of the Palestinian-led Islamic waqf.

FULL ARTICLE AT WIKIPEDIA.ORG
This article is licensed under the GNU Free Documentation License.
It uses material from the Wikipedia article "al-Aqsa Mosque."
Back to Article
/