Toronto's mayor undaunted when woman tosses drink in his face

TORONTO, June 16 (UPI) -- A woman is facing an assault charge for splashing juice into the face of Toronto's Mayor Rob Ford at a public event, officials said.

Shannon Everett, 27, of Toronto, allegedly tossed a cup of juice into the mayor's face at the city's Taste of Little Italy event Saturday, the Toronto Sun reported.

Police couldn't say what caused the woman allegedly to throw the drink, the Sun reported.

The mayor is fine, said Earl Provost, Ford's chief of staff, after the incident.

Toronto Councillor Doug Ford, who also was at the event, made light of the situation, saying, "I think everyone makes mistakes. The woman was just being foolish."

"Rob just moved on," he said, emphasizing that most others at the festival welcomed the mayor.

For more than a month, the media has covered the mayor on an almost daily basis since he was allegedly captured on a video smoking crack cocaine. Ford denies the accusations and the video has not been made public, the Sun reported.

Everett is scheduled to appear in court on July 23. 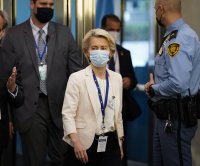