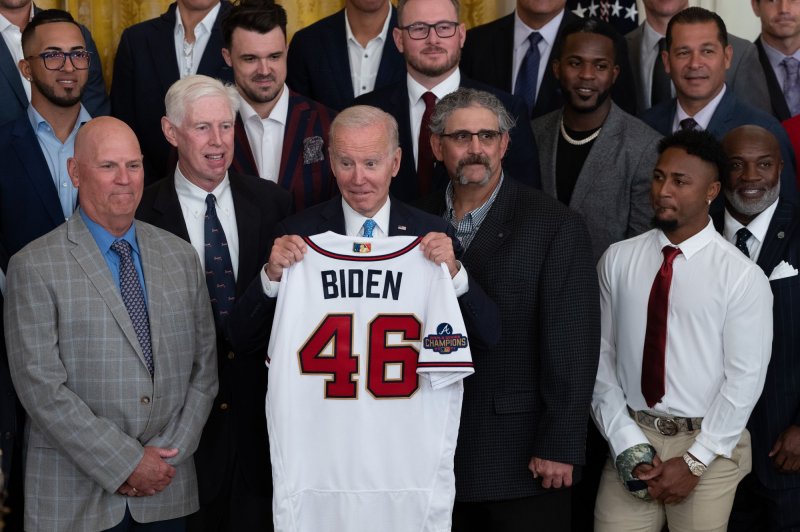 The president gathered with the players and coaches shortly after noon in the East Room.

"I married a Philly girl and she's smarter than I am and she's a hell of a lot better looking and like every Philly fan, she's convinced she knows more about sports than anybody else in any other city."

Biden joked that he had "to be careful about how nice I am to these guys today."

The president added that Atlanta is "a great sports city" and that the Braves are "a great reason for that."

"This team has literally been a part of history for over 150 years, the only franchise to field players in every single season since pro baseball began in 1870," Biden said.

Biden added that the team is "defined by the courage of Hank Aaron," the record-setting Hall of Famer who spent 21 seasons with the Braves in Milwaukee and Atlanta.

"Hank Aaron shattered a lot of records but he shattered them in racism as well, with dignity and class," Biden said.

Biden highlighted how the Braves had a rough start to the 2021 season.

"The franchise never quit, they never gave in. You rebuilt the whole outfield practically overnight. Play by play, you ground it out and you did it together," Biden said.

"You beat the Dodgers and then you beat the Astros to win it all, forever known as the upset kings of October. One of history's greatest turnarounds."

Biden added that the success of the Braves proves what Hank Aaron once said, "There's no shortcut in life. You have to take it one step at a time, work hard and you have to give back."

The president then praised the team for its charitable initiatives, including helping feed the hungry and supporting veterans.

"Bringing people together and inspiring us to do better by your example," Biden said.

"That's sports, that's America and that's why I'm honored to host the 2021 Braves at here at the White House. Congratulations."

The annual White House tradition this year took advantage of the Braves being in town for a three-game series with the Washington Nationals.

Terry McGuirk, chairman of the Atlanta Braves, said the team was "thrilled" to be at the White House.

"They played an extra-innings game last night. We got in hours late from doing a lot of traveling, you cannot believe at this point in the season how tired they are," McGuirk said.

"They won 8-6 in the 11th inning of the game last night. As the president says, this group never quits."

"It'll be a great experience. We're world champions, and we get to go to the White House," Braves manager Brian Snitker told The Atlanta Journal-Constitution ahead of the meeting. "That's kind of something special to get to tour and experience that. I think it'll be something I'll remember the rest of my life."

So far, team visits to the Biden White House have lacked any of the political controversies that vexed the occasions during the tenure of President Donald Trump, who once called on his supporters to "boycott baseball" when the MLB moved last year's All-Star game out of Atlanta in protest of Republican efforts to rewrite Georgia's election law.

With only two weeks remaining in the regular season, the Braves are locked in a fierce battle with the Mets for first place in the NL East, setting up a critical three-game series between the division rivals later this week in Atlanta.

U.S. News // 3 minutes ago
DHS delays REAL ID enforcement to 2025
Dec. 5 (UPI) -- The Department of Homeland Security on Monday has again extended the deadline for the enforcement of REAL ID requirements for travelers, according to the Transportation Security Administration.

U.S. News // 1 hour ago
Texas megachurch pastor returns from suspension
Dec. 5 (UPI) -- A married pastor of a Texas megachurch has been restored to his position after serving a three-month suspension for Instagram messages between him and another woman.

U.S. News // 3 hours ago
Trial of ex-Fort Worth police officer Aaron Dean starts Monday
Dec. 5 (UPI) -- Opening arguments for the trial of a white former police officer in Texas who killed a Black woman inside her home in 2019 that sparked racial protests started Monday without any Black jurors.

U.S. News // 5 hours ago
2022 year in review: Roe vs. Wade, War in Ukraine, losing Queen Elizabeth II
Dec. 5 (UPI) -- From abortion rights to war in Ukraine, the past year has seen Americans and the world face several historic events.

U.S. News // 11 hours ago
Police: Child safe after seeing mother fatally shot outside Texas hospital
Dec. 5 (UPI) -- Police in Houston said an 8-year-old girl was safe after witnessing a man fatally shoot her mother before turning the weapon on himself in the parking lot of the Texas Children's Hospital.

U.S. News // 23 hours ago
Gunfire damaged North Carolina power station, outage ongoing
Dec. 4 (UPI) -- Nearly 40,000 customers were still without power in North Carolina on Sunday night, after an apparent incident of vandalism involving the use of a firearm cut power a night prior in Moore County.