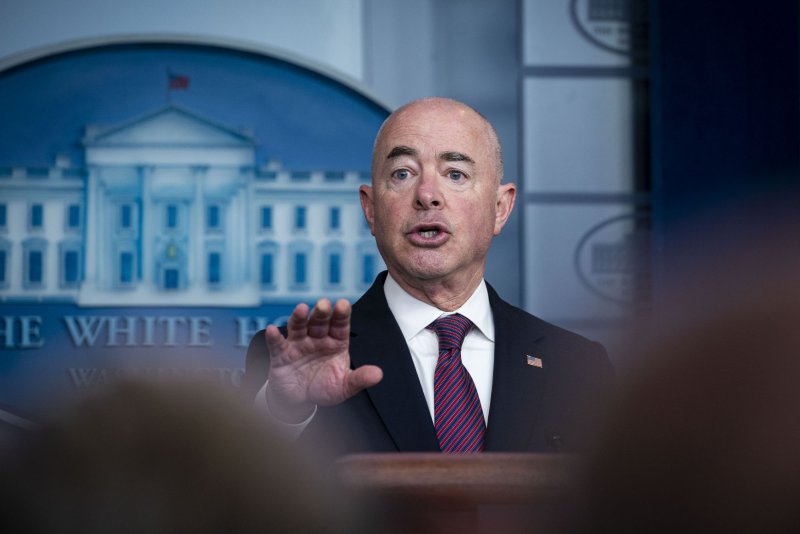 Alejandro Mayorkas, secretary of the U.S. Department of Homeland Security, speaks during a press briefing at the White House on Friday. Photo by Al Drago/UPI | License Photo

Sept. 24 (UPI) -- An encampment of thousands of mostly Haitian migrants has been entirely cleared from under a bridge in Del Rio, Texas, Homeland Security Secretary Alejandro Mayorkas announced Friday.

Of the roughly 15,000 people removed from the makeshift camp in south Texas, 2,000 have been deported to Haiti, 8,000 voluntarily traveled to Mexico and 5,000 were placed in immigration removal proceedings.

"Today, we have no migrants remaining in the camp under the International Bridge," Mayorkas told reporters during a White House press briefing. "Migrants continue to be expelled under the [Center for Disease Control and Prevention's] Title 42 authority.

"Title 42 is a public health authority and not an immigration policy, and it is important to note that Title 42 is applicable, and has been applicable, to all irregular migration."

The Title 42 policy was enacted by former President Donald Trump in March 2020 with the stated purpose of preventing those who cross the border illegally from potentially spreading COVID-19. Unaccompanied minors are not expelled under Title 42 after a change in policy in February.

The CDC, under President Joe Biden, extended the policy last month with plans to review it every 60 days.

The Biden administration has come under scrutiny for its handling of the Del Rio encampment, in which thousands of migrants lived under or near the International Bridge for more than a week.

In one instance, Border Patrol agents on horseback were captured on video and in photos appearing to charge at migrants crossing the Rio Grande. The White House said Thursday that Border Patrol temporarily suspended the use of horses in response to the outcry.