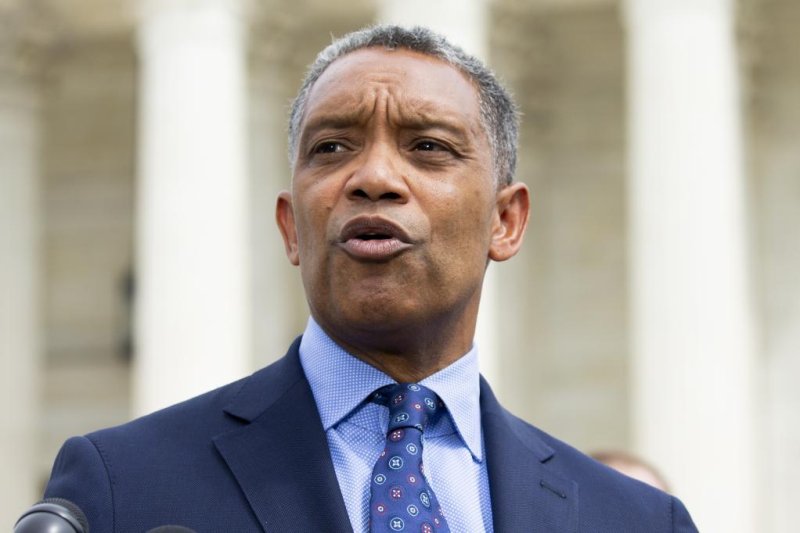 District of Columbia Attorney General Karl Racine delivers remarks while joining attorneys general during the announcement of a multistate antitrust investigation into Google, outside the Supreme Court in Washington, D.C. on Sept. 23, 2019. File Photo by Michael Reynolds/EPA-EFE.

Warehouse workers, who say they haven't been adequately protected from the coronavirus are seen at an Amazon facility in Hawthorne, Calif. on Dec. 15. File Photo by Jim Ruymen/UPI | License Photo

A coalition of labor and environmental activists march to the gate of Amazon founder Jeff Bezo's mansion protesting the companies working conditions during the COVID-19 crisis in Beverly Hills, Calif. on Oct. 4, 2020. File Photo by Jim Ruymen/UPI | License Photo

A coalition of labor and environmental activists gather at the gate of Amazon founder Jeff Bezo's mansion protesting the companies working conditions during the COVID-19 crisis in Beverly Hills, Calif. on Oct. 4, 2020. File Photo by Jim Ruymen/UPI | License Photo

May 25 (UPI) -- Washington D.C. Attorney General Karl Racine said Tuesday he has filed an antitrust lawsuit against Amazon claiming that its practices have eliminated competition and unfairly raised prices.

Racine, who filed the lawsuit in D. C. Superior Court, said the company fixes prices through agreements with sellers on its website, maintaining its "monopoly power." These agreements create "artificially high" prices by preventing sellers from offering their products at lower prices on websites, including their own e-commerce platforms, Racine said in a statement on his office's Facebook page.

"Amazon has used its dominant position in the online retail market to win at all costs," Racine said in a statement. "It maximizes its profits at the expense of third-party sellers and consumers, who are forced to pay artificially high prices, while harming competition, stifling innovation, and illegally tilting the playing field in its favor."

Third-party sellers who want to do business on Amazon's website must follow the provisions of its business solutions agreement. Amazon initially had a clause in the document called the "price parity provision," which prohibited sellers from offering their products on a competitors' website at a lower price.

Amazon removed that provision in March of 2019, but Racine said Tuesday that clause had been replaced with "an effectively-identical substitute."

"We filed this antitrust lawsuit to put an end to Amazon's illegal control of prices across the online retail market. We need a fair online marketplace that expands options available to District residents and promotes competition, innovation, and choice," Racine said in his statement.

The Federal Trade Commission and a group of 48 states and territories filed lawsuits last year accusing Facebook of anticompetitive conduct in its acquisition of Instagram and WhatsApp.

U.S. News // 22 minutes ago
Biden OKs sanctions against Ethiopian leaders over Tigray fighting
Sept. 17 (UPI) -- President Joe Biden signed an order Friday that authorizes economic sanctions against leaders in Ethiopia over the fighting in the Tigray region, where conflict has pushed Ethiopians to the brink of famine.

U.S. News // 5 hours ago
Biden admin sanctions 5 al-Qaida supporters in Turkey
Sept. 17 (UPI) -- The Biden administration has imposed sanctions against five supporters of al-Qaida in Turkey who have provided financial and travel assistance to the terrorist organization.