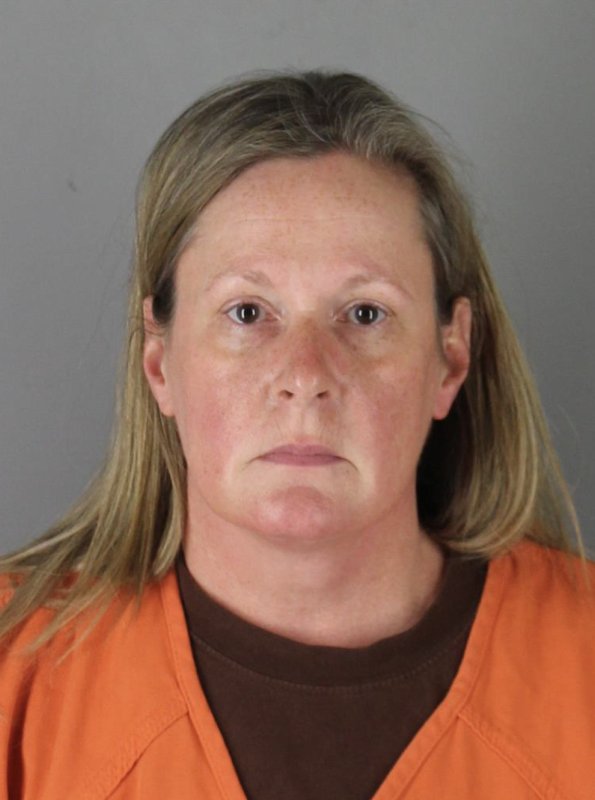 She was released from Hennepin County Jail after posting $100,000 bond, the Minneapolis Star Tribune reported.

The 26-year police veteran resigned from the Brooklyn Center Police Department on Tuesday.

Protests have been held for three straight nights in Brooklyn Center in the aftermath of Wright's death. About 60 people were arrested Tuesday night. Authorities said Tuesday's protest began peacefully in the afternoon, but later turned violent as protesters began throwing bricks, bottles and other items at police.

Participants also ignited fireworks and directed lasers at the eyes of the officers, police said.

Gannon said Monday that he believed Potter accidentally shot Wright with her service weapon when she had intended to use her Taser.

The Hennepin County Medical Examiner's Office said Wright died of a gunshot wound to the chest. His manner of death was classified as a homicide.

On Sunday afternoon, police pulled Wright over for an expired registration on his car and something hanging from his rearview mirror. Police discovered he was wanted on a misdemeanor warrant. As he attempted to flee the arresting officer, he was shot and soon after died.

In footage from her body-worn camera taken during the incident, Potter can be heard repeatedly saying "Taser" before letting off a single bullet and then cursing afterward.

"I shot him," she is heard yelling.

During Tuesday's protest, about 1,000 people congregated outside the Brooklyn Center Police Department headquarters, the focal point of the previous two nights of protests, and began shaking the metal fence that separated them from officers in riot gear and National Guard members, the Minneapolis Star Tribune reported.

Langer told reporters in a midnight news conference, that authorities gave dispersal orders after the protesters tried to "compromise the fence" and began throwing items at police.

"The behaviors that we continue to see are unacceptable, and we are not going to tolerate them," Langer said.

Authorities implemented a 10 p.m. curfew for Brooklyn Center and other regions, including the Twin Cities.

Minneapolis police Chief Amelia Huffman said there were two arrests in the city and no reports of looting or businesses damaged as there were in Minneapolis and Brooklyn Center the two previous nights.

Brooklyn Center Mayor Mike Elliot said Tuesday he has asked Gov. Tim Walz to reassign Wright's case to the office of the attorney general "to ensure transparency and to continue building trust in our community."

The shooting occurred during a tense time in Minneapolis, as the murder trial of former officer Derek Chauvin in the city nears its end.

Chauvin has been charged with murder in the killing of George Floyd, whose Memorial Day death sparked protests against racial inequality worldwide.

U.S. News // 11 hours ago
Google will delete data of those who visit abortion clinics
July 2 (UPI) -- Google announced Friday it will delete information including whether a person visited an abortion clinic as bans on terminating pregnancies grow in the wake of the Supreme Court's decision to overturn Roe v. Wade.

U.S. News // 12 hours ago
Man sought in shooting death of mom pushing baby stroller arrested in NYC
July 2 (UPI) -- The father of an infant whose mother was shot dead while pushing the baby's stroller on the Upper East Side of New York City earlier this week has been arrested.

U.S. News // 15 hours ago
Popular Minecraft gamer Technoblade dies of cancer at 23
July 2 (UPI) -- Technoblade, a massively popular gamer known for his Minecraft videos on YouTube, has died from cancer at the age of 23, his family announced Thursday.

U.S. News // 16 hours ago
Bodies of mother, 3 children recovered from Minnesota lake
July 2 (UPI) -- Minnesota police are investigating a possible triple-homicide after the bodies of a woman and her three children were recovered from a lake in Ramsay County.