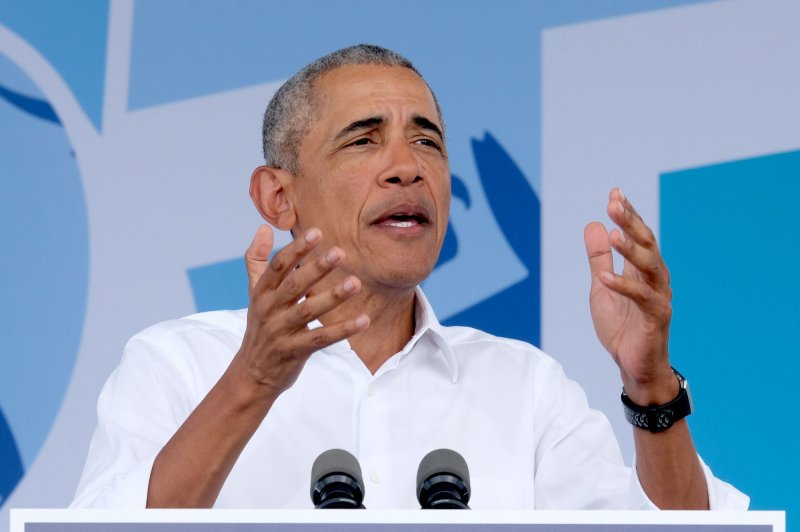 During a 45-minute speech at Florida International University's Biscayne Bay Campus in North Miami, Obama said the Trump administration ignored plans left behind by members of his own administration with guidance on how to fight a pandemic.

The rally took place on the first day of early voting in Florida, in an open field on which 228 cars were permitted to park for his speech. Instead of cheering, they honked.

"We literally left this White House a pandemic playbook to show them how to respond before a virus reached our shores," Obama said. "It must be lost along with the Republican healthcare plan."

Obama also directly responded to attacks against Biden, who served as his vice president during his administration.

"Listening to the Republicans, you'd think Joe was more communist than the Castros. Don't fall for that garbage," he said. "I think folks would know if he was a secret socialist."

Earlier in the day, Obama made a surprise visit to Miami Springs, a small, majority Latino city outside Miami Saturday, to motivate local campaign workers before they headed out to knock on doors.

"Many of you were involved when I ran in 2008 and some of you when I ran in 2012 and I am so grateful. The lifeblood of any campaign is not TV ads. It's not position papers. It's not the debates. It's organizing, going out there and doing it every day," Obama said.

Democratic strategists are focusing on heavily Latino areas in Florida, where polls say Cuban voters are likely to vote for Trump at a higher rate in 2020 than they did in 2016.

U.S. News // 11 hours ago
Google will delete data of those who visit abortion clinics
July 2 (UPI) -- Google announced Friday it will delete information including whether a person visited an abortion clinic as bans on terminating pregnancies grow in the wake of the Supreme Court's decision to overturn Roe v. Wade.

U.S. News // 13 hours ago
Man sought in shooting death of mom pushing baby stroller arrested in NYC
July 2 (UPI) -- The father of an infant whose mother was shot dead while pushing the baby's stroller on the Upper East Side of New York City earlier this week has been arrested.

U.S. News // 15 hours ago
Popular Minecraft gamer Technoblade dies of cancer at 23
July 2 (UPI) -- Technoblade, a massively popular gamer known for his Minecraft videos on YouTube, has died from cancer at the age of 23, his family announced Thursday.

U.S. News // 16 hours ago
Bodies of mother, 3 children recovered from Minnesota lake
July 2 (UPI) -- Minnesota police are investigating a possible triple-homicide after the bodies of a woman and her three children were recovered from a lake in Ramsay County.