In a statement posted to Facebook Saturday, Ethiopian minister of foreign affairs H.E. Gedu Andargachew said he told Ambassador Mike Raynor that a statement Trump made Friday was "incitement of war between Ethiopia and Egypt" that doesn't reflect Ethiopia's partnership with the United States and is not acceptable under international law.

During a Friday call with Sudan and Israel to discuss normalizing relations between Sudan and Israel, Trump referenced a long-simmering dispute -- that involves Ethiopia, Egypt and Sudan -- over a dam on the Blue Nile River.

"[Egypt] will end up blowing up the dam," Trump said. "And I said it and I say it loud and clear ... they'll blow up that dam. And they have to do something."

Ethiopia began building the Grand Ethiopian Renaissance Dam on the Blue Nile River, which connects the country to Egypt.

The country has spent $4.6 billion on the project, and it is nearly complete. But where Ethiopian leaders see it as a vital public works project that will reduce poverty, Egyptian leaders worry the dam will disrupt water access.

Gedu also said the statement was misleading because the dam won't stop the flow of the Nile.

"The minister further informed the ambassador that Ethiopia has never and will not in the future succumb to threats to its sovereignty and will be committed to continue the trilateral negotiations under the framework of the African Union," the statement said.

Ethiopia's former prime minister, Hailemariam Dessalegn, also tweeted Friday, calling Trump's statements "irresponsible," and asserting that Trump "doesn't have a clue on what he is talking about."

The United States had previously tried to broker a deal between the three countries over the disagreement, but Ethiopian officials ultimately walked away from negotiations, and in September the State Department suspended millions of dollars in foreign aid to Ethiopia after the country began filling up a reservoir behind the dam. 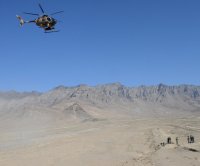 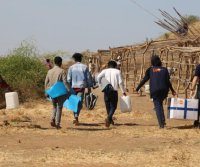