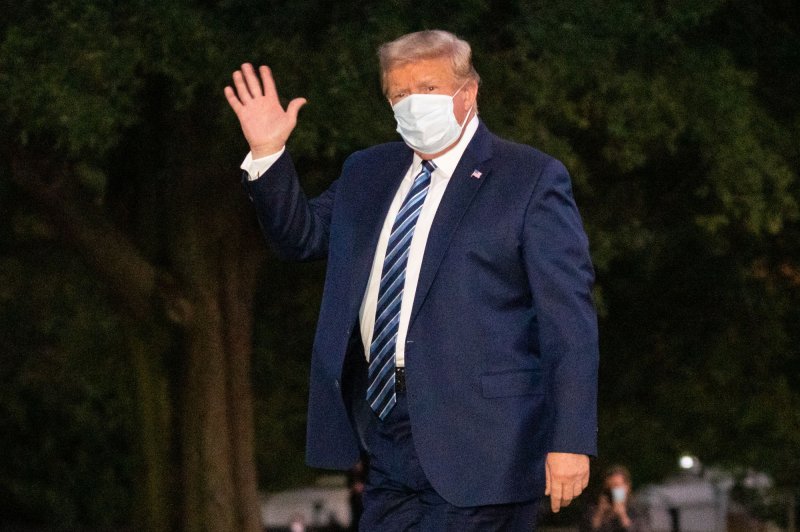 Oct. 6 (UPI) -- President Donald Trump reported having no symptoms Tuesday during his first morning back at the White House after being hospitalized with COVID-19 over the weekend, his physician said.

"This morning, the president's team of physicians met with him in the residence," Dr. Sean Conley said. "He had a restful first night at home, and today he reports no symptoms.

"Vital signs and physical exam remain stable, with an ambulatory oxygen saturation level of 95-97%. Overall he continues to do extremely well."

Trump returned to the White House on Monday evening after three days at Walter Reed National Military Medical Center in Bethesda, Md. He was admitted Friday evening.Conley said Sunday that Trump had been given supplemental oxygen after his oxygen saturation levels declined Friday. Trump also had a mild cough, nasal congestion and fatigue.

Upon his return to the White House on Monday, Trump boasted about his recovery and said Americans shouldn't fear COVID-19, sparking criticism for downplaying the virus that has killed more than 210,000 people in the United States.

Mike Pence's physician, Dr. Jesse Schonau, said Tuesday the vice president is still testing negative for the virus. Pence remained home Friday through Sunday "out of an abundance of caution" but that he returned to traveling Tuesday.

"Vice President Mike Pence is not a close contact with any individuals who have tested positive for COVID-19, including President Donald J. Trump and senior members of the White House administration, according to the guidelines of the Centers for Disease Control" and Prevention, Schonau said.

U.S. News // 6 hours ago
American medic in Ukraine killed while helping evacuate others
Feb. 3 (UPI) -- An American medic who was volunteering on the frontlines in Ukraine was killed when his vehicle was hit by a missile.

U.S. News // 9 hours ago
Treasury sanctions executives of Iranian UAV manufacturer
Feb. 3 (UPI) -- The Treasury Department announced sanctions on Friday against the directors of an Iranian unmanned aerial vehicle manufacturer for providing aerial support to Russia for its invasion against Ukraine.

U.S. News // 9 hours ago
U.S. announces $2.4 billion more defense aid to Ukraine
Feb. 3 (UPI) -- The U.S. Department of Defense said Friday Ukraine will get another $2.4 billion in U.S. military aid to further bolster its defense against the Russian invasion.

U.S. News // 10 hours ago
Honda urges owners of certain cars to get airbags repaired immediately
Feb. 3 (UPI) -- Honda is warning owners of vehicles with unrepaired Takata air bags not to drive them and instead bring them in for repair, saying that the risk to drivers could be deadly.
Advertisement