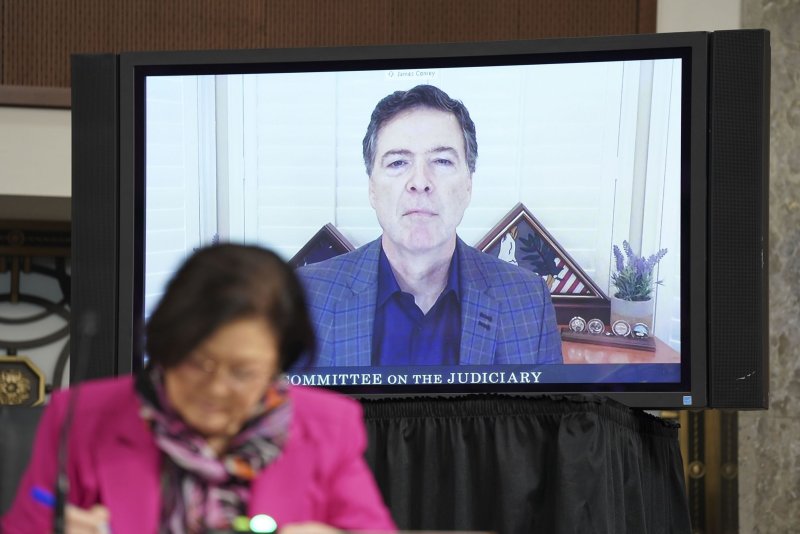 Testifying before the Senate judiciary committee as part of its oversight into the Crossfire Hurricane investigation, Comey disputed assertions by Trump, Republican senators and Attorney General William Barr that the probe was unfounded and politically motivated.

"Crossfire Hurricane" was the code name given to the FBI investigation into links between Trump's campaign and Russian officials, as well as whether there was coordination between the two parties to interfere in the election four years ago.

"This was an investigation that was appropriately predicated and that had to be opened and it was in the main conducted in the right way," Comey said, adding that the probe eventually resulted in nearly 200 criminal charges and dozens of indictments or guilty pleas after being taken over by Special Counsel Robert Mueller.

"The notion that the attorney general believes that was an illegitimate endeavor to investigate mystifies me," Comey said.

Comey, who appeared via video, conceded the bureau made some mistakes in the case, but asserted, "Overall, I'm proud of the work."

Committee chair Sen. Lindsey Graham, R-S.C., repeatedly pressed Comey on why Page was targeted for surveillance despite the emergence of exculpatory information.

"How could all that happen and not get up to you, the director of the FBI, of one of the most important investigations in the history of the FBI?" he asked.

"I can only speculate, because it didn't," Comey replied.

Graham said the committee is negotiating with McCabe to secure testimony, but Mueller declined an invitation to testify, saying he would not have enough time to prepare.

"This seems more like a political errand for President Trump's reelection effort," he said. "I think it's offensive to all Americans who pay taxes. I realize the president does not."

U.S. News // 56 minutes ago
Trump mocks Fauci, downplays COVID-19 at Arizona rally
Oct. 19 (UPI) -- President Donald Trump on Monday criticized the director of the National Institute of Allergy and Infectious Diseases, Dr. Anthony Fauci, while downplaying the COVID-19 pandemic at a pair of rallies in Arizona.

U.S. News // 5 hours ago
Dow Jones falls 410 points as COVID-19 stimulus deadline nears
Oct. 19 (UPI) -- The Dow Jones Industrial Average fell 410 points on Monday as a deadline on another round of stimulus imposed by House Speaker Nancy Pelosi drew nearer without progress toward a deal.

U.S. News // 7 hours ago
Federal judge strikes down Trump rule cutting food stamps
Oct. 19 (UPI) -- A federal judge has struck down a Trump administration rule that would have kicked 700,000 people off food stamps.

U.S. News // 7 hours ago
Florida voters wait in long lines on 1st day of early voting
Oct. 19 (UPI) -- Early voting began in the battleground state of Florida on Monday as long lines queued at numerous locations and a glitch shut down one county's website for several hours.