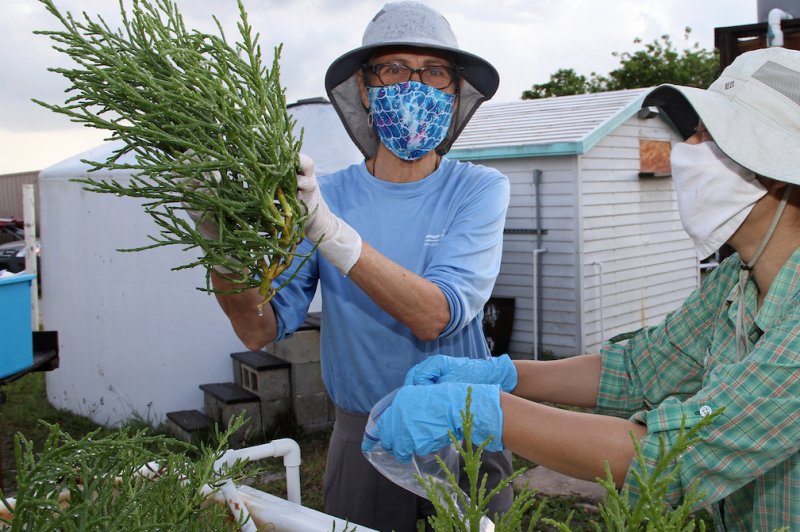 The native Florida vegetables that grow in salty areas near the ocean can be cultivated in fish farms using fish waste for fertilizer, according to new research. Such crops could provide a new sustainable and environmentally friendly source of nutrition, researchers say.

"I think there's a huge market for these sea veggies, which are more nutritious than even kale, the most nutritious soil-farmed plant," said Megan Davis, professor of aquaculture at Harbor Branch Oceanographic Institute in Fort Pierce, about 120 miles southeast of Orlando.

Davis led a 10-week study this spring to determine the best growing conditions for sea vegetables. Plants in the study were sea asparagus, which looks similar to regular asparagus; sea purslane, harvested for the fleshy leaves on long red stems; and saltwort, a smaller frilly plant.

The plants are high in minerals, such as zinc and iodine, and vitamins, but Davis said she is awaiting a detailed nutrition analysis from the harvest.

"Obviously, a lot of people eat seaweed, but I think these sea vegetables appeal to a broader public. They have a crisp salty taste," Davis said.

Besides Florida, the sea vegetables are native to other coastal regions around the world. For the Harbor Branch experiment, they were grown in tanks that also raise fish, shrimp, urchins and oysters.

The vegetables were grown in three different types of hydroponic media -- sand, clay pebbles and only water with nutrients. Davis and other researchers used the waste from the marine life to provide nutrients, or fertilizer.

She said the sand provided the best growth in the study, which received $25,000 in funding from the state's marine-themed specialty license plate sales. One of the plants grew to weigh 2 pounds in 10 weeks.

Companies that farm fish, shrimp and clams said they were impressed with the findings by the institute, which is part of Florida Atlantic University.

"We currently sell shrimp to many high-end restaurants, and we'd offer sea vegetables to the chefs who like new, interesting cuisine," Pearl said.

With 100 acres of shrimp tanks, Pearl's company has plenty of shrimp waste to use as fertilizer, he said.

"We've thought about doing this before, but we've been too focused on the business of growing shrimp. Given what we've learned, it might make sense now," Pearl said.

Shrimp are among many farmed marine products that could complement sea vegetables, said Carolina Panoff, sales and marketing manager at Seaventures Clam Co. in Fort Pierce.

"Sea vegetables look like an incredible market to get into. Seaweed is super healthy, and frankly, it should be available in every grocery store in the near future," Panoff said.

U.S. News // 55 minutes ago
Man drowns in Ohio River trying to save naked woman
Jan. 16 (UPI) -- A man who tried to save a naked woman who jumped into freezing and "turbulent" water of the Ohio River in Kentucky is believed to have drowned during his efforts Thursday, authorities said.

U.S. News // 2 hours ago
Extreme cold after major snowstorm to send Midwest, East into deep freeze
A brutally cold punch of Arctic air is expected to arrive in the United States next week, reinforcing winter across the Midwest and much of the East on the heels of this weekend's major snowstorm.