Eighty-six percent of likely Democratic caucus-goers say climate change is a very important or the most important issue in politics. Photo by Etienne Laurent/EPA-EFE

Feb. 21 (UPI) -- LAS VEGAS -- Climate change will be among the top priorities for Democratic voters in Nevada as the state begins to caucus Saturday.

Climate and environmental protection is a "very important" or the "most important" issue for 86 percent of likely Democratic caucus-goers in Nevada, according to a recent study conducted by the League of Conservation Voters and the Nevada Conservation League. Healthcare edged out climate change as the top policy concern, although climate change consistently appeared as one of the top two priorities among voters.

The data firm Public Policy Polling surveyed 859 likely Democratic caucus-goers for the poll. More than half of the surveys were conducted via text and the remaining 48 percent over the phone, either in English or Spanish, from Jan. 29-30.

Over the past few years, Nevada's temperatures have surged, with consecutive high-temperature days with little nighttime relief, climate records show. Since 1970, the average daily temperature has increased by 5.8 degrees, making it the fastest-warming city in the United States, according to a 2019 report by the research group Climate Central.

Last August, the state broke a record for the most consecutive days with temperatures over 105 degrees. Summer 2019 tied with summer 2016 as the hottest on record in the northern hemisphere, according to the National Oceanic and Atmospheric Administration.

"We're experiencing climate change faster and hotter than anyone else in the country," said Patrick Donnelly, Nevada state director at Center for Biological Diversity, during a climate change town hall in Las Vegas organized by the Bernie Sanders for Nevada campaign. "I prioritize working for the environment [not only] for my career [but also] for my life."

The rise in extreme heat is one of the reasons behind an increase in heat-related deaths in recent years in Southern Nevada, according to a 2019 study published in the International Journal of Environmental Science and Technology.

"We found that when temperatures increase, so does the number of heat-related deaths," said Erick Bandala, an assistant research professor at Desert Research Institute and lead author of the study.

Between 2007 and 2016, Las Vegas registered a record number of 437 heat-related deaths, with the greatest number occurring in 2016, the study shows.

Extreme heat is also a "threat multiplier" for a number of diseases, from heart to lung diseases, Maggi said.

As a result of a rise in heat, Nevada had a record number of poor air quality days in 2019, especially in the southern region.

"The hotter the air gets, the more pollution sticks around in the air," Maggi said. "That means that even people without respiratory diseases have a hard time being outside, exercising, hiking, doing yard work, running errands. It limits your ability to live your life."

The sentiment towards climate change is even stronger among Latinx caucus goers, who ranked it as their top priority in the poll.

"If you are one of the people of color in Southern Nevada, if you're brown, Latinx, Asian American, Pacific Islander indigenous, you are feeling all the impacts of climate change in higher rates and in more exaggerated ways," Maggi explained.

Predominantly black and Hispanic neighborhoods in Las Vegas are the city's hottest and have the worst air quality. As a result, one out of 12 kids suffers from asthma, said Rudy Zamora, director of Chispa Nevada, the program within the League of Conservation Voters that focuses on Latinx communities.

"As a father of a 5-year-old who suffers from asthma, [I know that without the] asthma medication [my son] takes ... day to day he can't go outside or participate in school activities," Zamora said.

The environmental injustice that black and brown communities "endure all the time takes away from people's quality of life," said former Ohio state Sen. Nina Turner, a supporter of Sen. Bernie Sanders, I-Vt.

As climate change receives greater attention in national politics, Hispanic Americans have been among the most vocal advocates for an action plan. The effort has crossed party lines, from former Rep. Carlos Curbelo, R-Fla., who tried to forge bipartisan support for climate action before losing his seat in the 2018 midterm election, to Rep. Alexandria Ocasio-Cortez, D-N.Y., a champion of the Green New Deal and denouncer of the racial and economic inequality that accompanies climate change.

Almost half of Latinx voters said they are "much more likely" to support a candidate who makes climate change a top priority.

But because climate change is an intersectional issue, it requires a comprehensive plan, Zamora said.

"Climate change impacts everything -- it impacts water, agriculture, housing. We live in a time of multiple overlapping and intersecting crises. They are all urgent and they are all existential," Naomi Klein, author of On Fire: The (burning) Case for a Geen New Deal, explained. "So, we just need to multitask -- that's the bottom line."

But there is not much time left, Maggi added, and the presidential election is "our last best chance" to ensure adequate action.

"We need a president who is going to do everything they can at the national level to make this a national priority because at the end of the day, Nevada can do everything, but it only produces so much carbon -- it only represents so much of the carbon's picture globally and nationally," she said. "And so we really need the federal government."

"There is no way that the local authority can deal with all these problems," Bandala agreed.

But according to 38 percent of Latinx respondents, candidates are not addressing climate change extensively enough.

"Every debate we watched, we maybe got a minute or two [on the topic], or we were more than halfway through and only then there was a really small question," said Sayuri Rupani-Hayes, a Nevada resident. "Climate change is a global crisis and it needs to be talked about more."

During Wednesday's presidential debate, a climate reporter was among the moderators for the first time in a Democratic debate this election season. 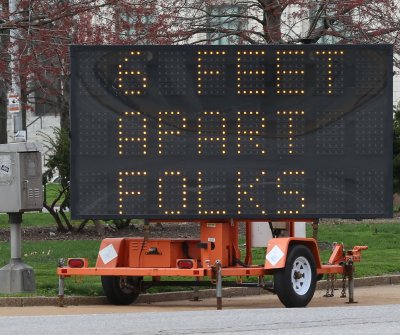