By
Nicholas Sakelaris and Sommer Brokaw

April 30 (UPI) -- President Donald Trump and the top two Democrats in Congress met Tuesday, and said they agreed that efforts to repair and maintain U.S. infrastructure will cost about $2 trillion.

"We agreed on a number, which was very, very good," Schumer said.

Schumer and Pelosi said the three hadn't agreed on how to pay the $2 trillion infrastructure bill, but added they'll meet again for more discussions in the coming weeks.

RELATED U.S. will be 'majority-minority' in next 25 years

While Democrats and Republicans have disagreed on many issues, rebuilding aging bridges and roads in the United States is one issue that's received bipartisan support. Trump has promised "the biggest and boldest infrastructure investment in American history" but hasn't delivered it, yet. Tuesday's meeting, though, could signal the start of that and present a rare chance for cooperation.

Schumer said "there was good will" at Tuesday's sit-down and called the tone "different than some of the other meetings we've had."

At a previous meeting in December, the trio clashed on camera over Trump's border wall -- for which the president said he'd be "proud" to shut down government to get funding for the wall. Days later, the shutdown began and it lasted for 35 days.

Tuesday's was a closed-door meeting.

Democrats have said that most infrastructure funds should come from the federal government. Trump's latest plan targeted $200 billion in federal funds to spur $1 trillion in spending from state and local governments, along with private partners.

D.J. Gribbin, a former assistant to the president on infrastructure issues, said he was encouraged about Tuesday's meeting.

"The current climate seems less than optimal for reaching a consensus," Gribbin said.

Pelosi and Schumer said in a joint letter this week the agreement would require "substantial, new and real revenue," but didn't offer any specifics.

"As you know, the issue of infrastructure is a bipartisan congressional priority and we believe there are significant majorities in both the House and Senate to take action on the issue," the letter stated.

Disagreements over the Robert Mueller report also loom large as Congress prepares to question Attorney General William Barr Thursday and Friday. Congressional Democrats led by Pelosi and Schumer want to dig into the redacted report and question Barr over his handling of it. Barr has threatened to skip the House judiciary committee Thursday because of a disagreement over the format. He's set to testify before the Senate judiciary committee Friday. 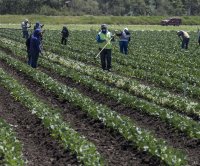