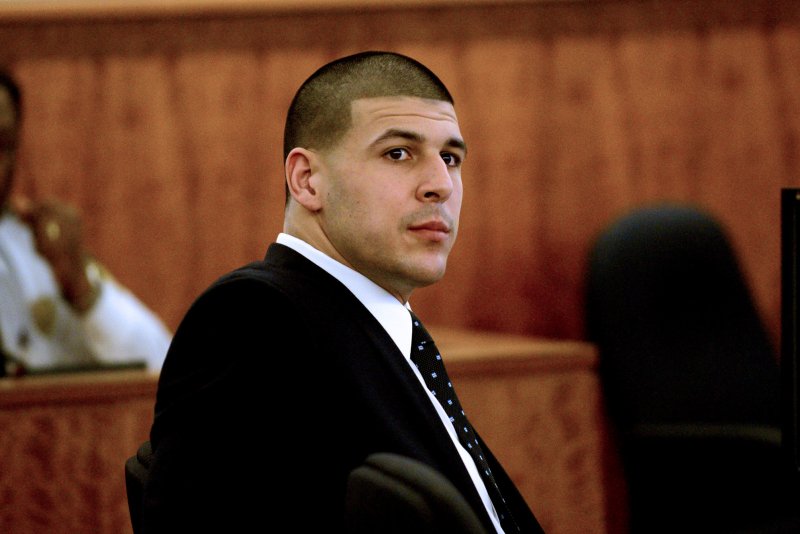 Former New England Patriots player Aaron Hernandez's murder conviction was overturned due to a state law the high court said will not be used again. File Photo by Ted Fitzgerald/EPA

The SJC procedurally voids first-degree murder convictions in cases when a defendant dies before their appeal is heard. Hernandez's appeal was still pending when he hanged himself in his cell at Souza-Baranowski Correctional Center in Lancaster, Mass.

On April 15, 2015, Hernandez was found guilty of first-degree murder after the 2013 killing Lloyd, a semi-professional football player who was dating Hernandez's fiance's sister. Lloyd's body was found in an industrial park about 1 mile away from Hernandez's home in North Attleboro, Mass.

On April 17, 2017, Hernandez was acquitted of a 2012 double-murder charge in the deaths of Daniel de Abreu and Safiro Furtado in Boston. Two days later he killed himself. He was 27.

"The family of Odin Lloyd is pleased that the Supreme Judicial Court of Massachusetts has determined to reinstate the conviction against Aaron Hernandez," Sheff said in a statement published by the Boston Globe. "This decision has helped the family to obtain closure from the horrible loss of their beloved son Odin. He was an inspiration to all who knew him and a devoted member of his family and the community. It has solidified their faith in the Massachusetts Justice System."

"We conclude that the doctrine of abatement ab initio is outdated and no longer consonant with the circumstances of contemporary life, if, in fact, it ever was,'' Justice Elspeth Cypher wrote. "The record will accurately reflect the case as it was at the time of death; it will reflect the status quo."