French militant who attacked Jewish museum in 2014 sentenced to life

Security was on alert at the Brussels Palace of Justice during the sentencing Monday of Mehdi Nemmouche, the man convicted last week of killing four people at the Jewish Museum of Belgium in 2014. Photo by Stephanie Lecocq/EPA-EFE

March 12 (UPI) -- A French man convicted of killing four people at a Jewish museum in 2014 has been sentenced to life in prison.

Mehdi Nemmouche, a 33-year-old militant who'd previously fought in Syria for the Islamic State, was found guilty last week of "terrorist murder" for the anti-Semitic massacre of four people at the Jewish Museum of Belgium on May 24, 2014. It was the first terrorist attack on European soil by an individual who had fought for the group in Syria.

He was arrested in Marseilles, France, six days after the shooting. Shortly after, he was extradited to Belgium to stand trial.

Accomplice Nacer Bender, 30, was sentenced to 15 years in prison for having helped plan the attack and supply Nemmouche with the weapons he used during the crime.

"I am ashamed to have crossed paths with [Nemmouche]," Bender told the court following sentencing. "He is not a man, he is a monster."

Nemmouche had claimed to be innocent, and his lawyer attempted to paint his client during the two-month trial as having been set up by foreign intelligence agencies in a conspiracy targeting Mossad, the Israeli intelligence agency.

World News // 14 minutes ago
'Unprecedented' flooding event wreaks havoc in Uruguay capital of Montevideo
A deluge struck Uruguay's capital of Montevideo at the beginning of this week, causing chaotic scenes across the city as streets were left underwater after more than a month's worth of rain fell in a few hours. 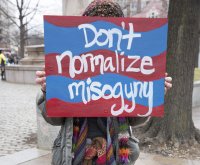