Rate of Americans OK with pornography the highest since 2011, poll says

Americans have viewed pornography as more acceptable over time, according to Gallup. Photo by Gajus/Shutterstock

Forty-three percent of Americans now believe pornography is "morally acceptable," poll results released Tuesday indicate. That is a seven-percentage-point increase from last year and the highest level since 2011.

Gallup attributed part of that leap to a "sizable change" in attitudes among Democrats. Fifty-three percent of Democrats told Gallup they find pornography morally acceptable.

Researchers said Americans have become more liberal in their views on the behavior of others. This year, Gallup found record rates of permissiveness this year on several issues, including birth control, divorce, gay or lesbian relationships and polygamy.

Gallup's annual Values and Beliefs survey was conducted by telephone May 1-10 with a random sample of 1,024 adults 18 and older, living in all 50 U.S. states and the District of Columbia. It has a 4 percent margin of error. 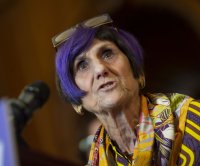