March 29 (UPI) -- A day after he was dismissed, former Cabinet member David Shulkin said Thursday he disagreed with the Trump administration's plans to privatize the Department of Veterans Affairs.

In interviews with NPR and The New York Times, Shulkin also said he was advised by the White House not to discuss a controversy over funds used on a trip to Europe last year -- an issue he said was over-hyped.

"I think that it's essential for national security and for the country that we honor our commitment by having a strong VA," he told NPR. "I was not against reforming VA, but I was against privatization."

The dismissal occurred a month after VA Inspector General Michael Missal determined Shulkin's chief of staff altered an email last year to get European travel expenses paid for the secretary and his wife.

The 84-page report was a response to an anonymous complaint that the altered email sought more than $4,000 in taxpayer funds to pay for the Shulkins' travel. The 11-day trip included two extensive travel days and 3 1/2 days of events at a cost of $122,334.

"There was nothing improper about this trip, and I was not allowed to put up an official statement or to even respond to this by the White House," he said. "I think this was really just being used in a political context to try to make sure that I wasn't as effective as a leader moving forward."

Shulkin told the Times the notion of privatizing the VA should receive thorough debate.

"The advocates within the administration for privatizing VA health series reject this approach. They saw me as an obstacle to privatization who had to be removed," Shulkin said. "Unfortunately, the department has become entangled in a brutal power struggle with some political appointees choosing to promote their agendas instead of what's best for veterans."

RELATED Shulkin: VA getting 'back on track' after Trump firing rumors

The Disabled American Veterans group said while it wants to learn more about Jackson, it is "extremely concerned" about the "existing leadership vacuum" at the department.

"At a time of critical negotiations over the future of veterans healthcare reform, VA today has no secretary, no undersecretary of health, and the named acting secretary has no background in healthcare and no apparent experience working in or with the department," the group said in a tweet Wednesday.

U.S. News // 14 hours ago
Biden speaks on human rights at rededication of Dodd Center in Conn.
Oct. 15 (UPI) -- President Joe Biden decried the state of human rights across the globe Friday while attending a rededication ceremony honoring former Sen. Chris Dodd at the University of Connecticut.

U.S. News // 20 hours ago
FDA panel recommends J&J COVID-19 booster for all recipients who got first shot
Oct. 15 (UPI) -- An FDA advisory panel on Friday recommended a Johnson & Johnson COVID-19 vaccine booster for all adults who received the original shot, meaning the committee has now approved extra doses for all three U.S. vaccines.

U.S. News // 14 hours ago
Parkland school gunman Nikolas Cruz to change plea to guilty on all charges
Oct. 15 (UPI) -- The man who killed 14 students and three staffers in the Parkland school shooting attack three years ago will plead guilty to charges of first-degree murder in a bid to escape the death penalty, attorneys said Friday. 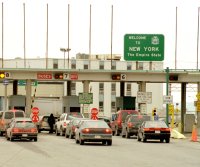 U.S. News // 18 hours ago
DHS says it will restart Trump's 'Remain in Mexico' policy next month
Oct. 15 (UPI) -- Complying with a Supreme Court order, The Biden administration says within a few weeks it will reinstate an immigration policy by former President Donald Trump that forces migrants at the border to wait in Mexico.