A recipient of the subpoena, who spoke on the condition of anonymity, shared a copy of the document with Axios and NBC News.

The subpoena seeks emails, text messages, work documents, handwritten notes and telephone logs the witnesses sent to and received from 10 individuals, dating back to Nov. 1, 2015. That date is less than five months after Trump announced his presidential campaign.

The individuals listed in the subpoena include:

-- Rick Gates, former Trump campaign aide who pleaded guilty in February to Mueller charges of lying to the FBI and defrauding the government

-- Paul Manafort, former Trump campaign manager who pleaded not guilty to charges of lying to the FBI and money laundering, among a number of other charges

-- Carter Page, a former Trump campaign aide and subject of surveillance under the Obama administration

-- Roger Stone, Trump campaign adviser who said he communicated with WikiLeaks about the hacking of Democrats

Former Trump aide Sam Nunberg told The Washington Post and MSNBC he received a similar subpoena, though it's not clear if he's the same anonymous witness who spoke to news outlets in earlier reports.

Nunberg said he doesn't plan to comply with the subpoena to supply documents or appear before the grand jury on Friday. Nunberg said he intended to tear up a copy of the document on Bloomberg TV.

"Let him arrest me," he told The Post. "Mr. Mueller should understand I am not going in on Friday."

Mueller's team is investigating whether the Russian government interfered in the 2016 U.S. presidential election, whether Trump's campaign colluded with that alleged effort and whether Trump attempted to object those investigations by firing former FBI Director James Comey last May.

Mueller has made a number of indictments as part of the investigation and gotten guilty pleas from Gates, former national security adviser Michael Flynn (lying to the FBI), New York-based Dutch lawyer Alex Van Der Zwaan (lying to the FBI about Manafort-Ukraine links) and Richard Pinedo (identify fraud linked to Russian efforts).

U.S. News // 11 hours ago
George Floyd remembered as a 'powerful man' during Minneapolis memorial
June 4 (UPI) -- George Floyd's family praised him as a "powerful man" who "would stand up for injustice anywhere" during his memorial Thursday in Minneapolis.

U.S. News // 3 hours ago
CDC: U.S. coronavirus death toll could reach 143K by June 27
June 4 (UPI) -- The U.S. Centers for Disease Control and Prevention on Thursday forecast the U.S. death toll from the coronavirus could reach as high as 143,000 by the end of the month.

U.S. News // 4 hours ago
Federal appeals court extends block on voting-by-mail expansion in Texas
June 4 (UPI) -- A three-judge panel of the 5th U.S. Circuit Court of Appeals extended its order blocking a lower court's sweeping ruling that would have allowed all Texas voters to qualify to vote by mail during the coronavirus pandemic

U.S. News // 17 hours ago
Judge advances murder cases of three men charged in Ahmaud Arbery killing
June 4 (UPI) -- A Georgia judge on Thursday advanced the cases against the three defendants charged with murder in the killing of Ahmaud Arbery to trial court.

U.S. News // 5 hours ago
Judge sets bail at $1M for three Minneapolis officers
June 4 (UPI) -- A Hennepin County, Minn., judge on Thursday set a $1 million bail for three former officers who were present during the arrest of George Floyd that led to his death last week. 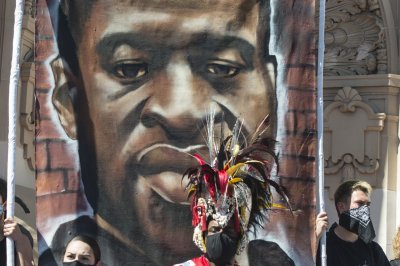