A recipient of the subpoena, who spoke on the condition of anonymity, shared a copy of the document with Axios and NBC News.

The subpoena seeks emails, text messages, work documents, handwritten notes and telephone logs the witnesses sent to and received from 10 individuals, dating back to Nov. 1, 2015. That date is less than five months after Trump announced his presidential campaign.

The individuals listed in the subpoena include:

-- Rick Gates, former Trump campaign aide who pleaded guilty in February to Mueller charges of lying to the FBI and defrauding the government

-- Paul Manafort, former Trump campaign manager who pleaded not guilty to charges of lying to the FBI and money laundering, among a number of other charges

-- Carter Page, a former Trump campaign aide and subject of surveillance under the Obama administration

-- Roger Stone, Trump campaign adviser who said he communicated with WikiLeaks about the hacking of Democrats

Former Trump aide Sam Nunberg told The Washington Post and MSNBC he received a similar subpoena, though it's not clear if he's the same anonymous witness who spoke to news outlets in earlier reports.

Nunberg said he doesn't plan to comply with the subpoena to supply documents or appear before the grand jury on Friday. Nunberg said he intended to tear up a copy of the document on Bloomberg TV.

"Let him arrest me," he told The Post. "Mr. Mueller should understand I am not going in on Friday."

Mueller's team is investigating whether the Russian government interfered in the 2016 U.S. presidential election, whether Trump's campaign colluded with that alleged effort and whether Trump attempted to object those investigations by firing former FBI Director James Comey last May.

Mueller has made a number of indictments as part of the investigation and gotten guilty pleas from Gates, former national security adviser Michael Flynn (lying to the FBI), New York-based Dutch lawyer Alex Van Der Zwaan (lying to the FBI about Manafort-Ukraine links) and Richard Pinedo (identify fraud linked to Russian efforts). 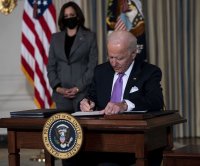 U.S. News // 4 hours ago
White House recommits to putting Harriet Tubman on $20 bill
Jan. 26 (UPI) -- After it was essentially sidetracked by the Trump administration, the new $20 bill featuring civil rights icon Harriet Tubman is back on the fast track under President Joe Biden.

U.S. News // 4 hours ago
Tornado kills teen, causes significant damage in Alabama
A large and dangerous tornado struck a northern suburb of Birmingham, Ala., late Monday, killing one and leaving a path of damage with reports of injuries. 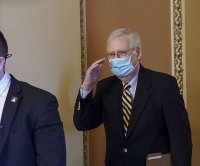 U.S. News // 12 hours ago
Portland police arrest driver who struck 6 people
Jan. 26 (UPI) -- Police officers in Oregon have arrested a motorist accused of striking at least six people, including one fatally, with their car over a span of dozens of Portland city blocks, authorities said.

U.S. News // 13 hours ago
9 Houston officers charged in probe of botched 2019 raid
Jan. 25 (UPI) -- A Texas grand jury on Monday indicted nine Houston police officers, including one for murder, for crimes uncovered during an investigation into a botched drug raid that left two people and their dog dead.