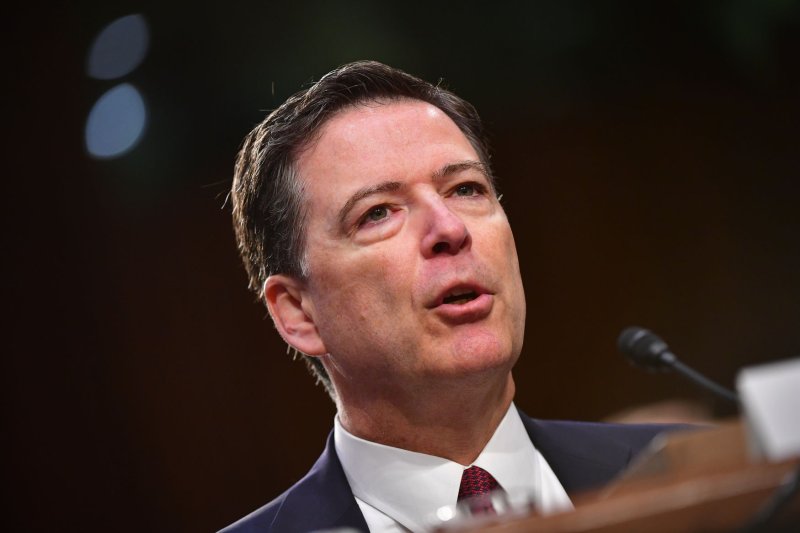 Former FBI Director James Comey (L) is sworn in as he prepares to testify at a hearing of the Senate Select Intelligence Committee on Capitol Hill in Washington on Thursday. Photo by Pete Marovich/UPI | License Photo

The seat for Former FBI Director James Comey is seen before he is scheduled to testify before the Senate Select Intelligence Committee Chairman on Capitol Hill in Washington on Thursday. Comey is expected to testify about his interactions with President Donald Trump that included the alleged pressure Comey felt to stop certain investigations regarding Russia and its interference in the presidential election. Comey was abruptly fired by the president last month. Photo by Kevin Dietsch/UPI | License Photo

June 8 (UPI) -- Former FBI Director James Comey, who President Donald Trump fired on May 9, is set to testify before the Senate Select Committee on Intelligence on Thursday.

Comey is scheduled to address the committee during the open hearing at Hart Senate Office Building in Washington, D.C., at 10 a.m.

The former FBI director will likely face questioning about his termination, the investigation into Russia's meddling in the U.S. election and encounters he had with Trump.

The committee on Wednesday released Comey's prepared remarks ahead of the hearing. In the prepared remarks, Comey plans to tell the Senate investigators that Trump asked him to end the investigation into former national security adviser Michael Flynn.

In his statement, Comey recalls several one-on-one conversations he had with Trump over four months -- three in person and six over the phone. He met privately with Trump in the Oval Office on February 14, one day after Flynn was fired.

"I replied only that 'he is a good guy,'" the former bureau chief added. "I did not say I would let this go."

RELATED Trump to nominate Christopher Wray as next FBI director

After the meeting, Comey wrote up details of the meeting in a memorandum -- standard procedure for a person in the FBI director's position, experts have noted.

"I immediately prepared an unclassified memo of the conversation about Flynn and discussed the matter with FBI senior leadership. I had understood the president to be requesting that we drop any investigation of Flynn in connection with false statements about his conversations with the Russian ambassador in December," Comey's statement continues. "I did not understand the president to be talking about the broader investigation into Russia or possible links to his campaign.

"It was very concerning, given the FBI's role as an independent investigative agency."

Comey agreed to testify before the Senate panel, which is conducting one of three U.S. investigations related to Russia, last week after receiving clearance from special investigator Robert Mueller.

U.S. News // 4 hours ago
Army trainee arrested after hijacking South Carolina school bus; no one hurt
May 6 (UPI) -- An Army trainee from Fort Jackson was arrested Thursday after he hijacked a South Carolina elementary school bus with 18 children on board, authorities said. No one was hurt. 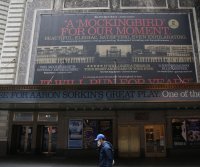 U.S. News // 9 hours ago
Broadway tickets go on sale in NYC as theaters aim to reopen in 4 months
May 6 (UPI) -- Tickets for Broadway shows go on sale Thursday as New York City continues to ease COVID-19 restrictions and theaters on the Great White Way prepare to reopen to full capacity four months from now.