President Barack Obama on Thursday told a crown of supporters in Miami that, thanks to Donald Trump, Republicans are now locked in a "bromance" with Russian President Vladimir Putin. Obama was in South Florida to campaign for Hillary Clinton. Photo by Nell Redmond/UPI. | License Photo

MIAMI, Oct. 20 (UPI) -- President Barack Obama on Thursday told a crowd of supporters that the Republican party, thanks to controversial nominee Donald Trump, are now comfortable "having a bromance" with Russian President Vladimir Putin.

The president fired up the crowd in Miami, where he campaigned for Democratic nominee Hillary Clinton. Obama picked up on a theme Clinton began during Wednesday's debate, criticizing Trump for "kissing up" to the Russians and accepting their help hacking Democratic organizations and Clinton's campaign chairman to try to sway the election.

Trump, though, has denied any collusion with Putin's government and said Wednesday that he doesn't believe there is enough evidence to conclude the Russians are behind the election hacks -- which is contrary to what many U.S. government officials believe. Instead, Trump said any number of hostile foreign governments could be responsible.

The FBI said earlier this month the hackers who accessed Democratic emails definitely had ties to the Russian government. On Thursday, researchers confirmed the hacking of Clinton campaign chairman John Podesta bore identical trademarks to the previous hacks at the Democratic National Committee and other groups.

Invoking former President Ronald Reagan, a conservative icon who squared off against the Soviet regime during the Cold War, Obama questioned why more Republicans who say they revere Reagan are not calling out Trump for praising Putin, a former KGB operative.

"If you've made a career of idolizing Ronald Reagan, then where were you when your party's nominee was kissing up to Vladimir Putin, the former KGB officer?" Obama said. "You used to criticize me for even talking to the Russians, now all of a sudden you're OK with your nominee having a bromance with Putin."

.@POTUS: "Now suddenly you're okay with your nominee having a bromance with Putin." pic.twitter.com/yrvIIdNVGU 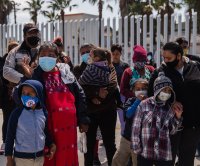 U.S. News // 6 hours ago
Texas Gov. Abbott announces $250 million for border wall
June 16 (UPI) -- Texas Gov. Greg Abbott on Wednesday announced some new details of his plan for the state to build its own border wall.