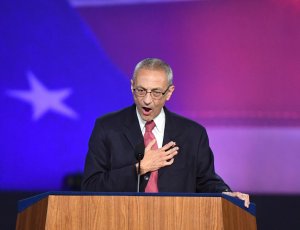 U.S. News // 3 months ago
Biden seeks to return U.S. to climate leadership with global summit
Five years to the day after world leaders signed the Paris Agreement, President Joe Biden is hosting a summit on Thursday with fellow heads of state to stimulate efforts to tackle climate change.

U.S. News // 3 years ago
Trump ally Roger Stone to House panel: No Russian collusion
Roger Stone, a longtime confidant of President Donald Trump, told House Intelligence Committee there is "not one shred of evidence" he colluded with Russia.

U.S. News // 4 years ago
House, Senate leaders agree on deal for increased Russia sanctions
Congressional leaders have agreed on legislation that would toughen sanctions against Russia with what is expected to be a veto-proof bipartisan majority.

U.S. News // 4 years ago
'Pizzagate' gunman gets four years in federal prison
A North Carolina man was sentenced to four years in prison after firing a gun inside a pizza shop where he believed Democrats were running a child sex ring.

Under President-elect Obama and Vice President-elect (Joe) Biden, the American people will see a transition of government that is efficient, that is organized, that is bipartisan and more open and transparent than others before

John David Podesta (born January 8, 1949) was the fourth and final White House Chief of Staff under President Bill Clinton from 1998 until 2001. He is currently President of the Center for American Progress, a liberal think tank in Washington, D.C, and is also a Visiting Professor of Law at the Georgetown University Law Center. Podesta was co-chairman of the Obama-Biden Transition Project.

Podesta spent most of his early years in Chicago growing up in the neighborhood of Jefferson Park on the city's Northwest Side. His father was Italian-American and his mother Greek-American. In 1967, he graduated from Lane Technical High School located in Chicago. In 1971, Podesta graduated from Knox College in Galesburg, Illinois. He attended and graduated from the Georgetown University Law Center in 1976. Podesta worked as a trial attorney in the Department of Justice's Honors Program in the Land and Natural Resources Division (1976–1977), and as a Special Assistant to the Director of ACTION, the federal volunteer agency, (1978–1979).

On June 6, 1998, during his Knox College commencement address, Mr. Podesta spoke of his family's early life: "Let me close with a couple of thoughts. Permit me what my kids would refer to as an ethnic moment. One month ago I stood on the White House lawn, and I watched as President Clinton, the man I'm proud to work for, greeted the Italian Prime Minister, Romano Prodi. It caused me to think about my grandparents, who came to America from Italy at the turn of the century and struggled their whole lives, never attending school, living in a walkup tenement in downtown Chicago. My grandfather working as a stevedore. And I thought about my father who had to quit high school after one year to support his family, who worked in factories his whole life, but who kept pushing my brother and myself to get a good education. I realized that I couldn't have been on that lawn without the support—quite literally the scholarship and financial support, but as importantly, the educational and emotional support that Knox College gave me."

FULL ARTICLE AT WIKIPEDIA.ORG
This article is licensed under the GNU Free Documentation License.
It uses material from the Wikipedia article "John Podesta."
Back to Article
/