WASHINGTON, Aug. 30 (UPI) -- Responding to reports that two states had election databases hacked, FBI Director James Comey said Tuesday the agency takes such threats "very, very seriously" amid calls by a top Democrat to investigate the matter before the election.

Senate Minority Leader Harry Reid said in a letter to Comey the government should open an investigation into alleged election tampering by Russian spies.

Reid's letter comes as reports surfaced that voter registration databases in Illinois and Arizona were hacked. The FBI said it is possible the Russian government was behind the data breach and encouraged all states to take additional action to secure online data in advance of November's election.

"I have recently become concerned that the threat of the Russian government tampering in our presidential election is more extensive than widely known and may include the intent to falsify official election results," Reid wrote to Comey. "The prospect of a hostile government actively seeking to undermine our free and fair elections represents one of the gravest threats to our democracy since the Cold War and it is critical for the Federal Bureau of Investigation to us every resource available to investigate this matter thoroughly and in a timely fashion."

Comey responded Tuesday, saying, "we take very seriously any effort by any actor to influence the conduct of affairs in our country, whether that's an election or something else."

Reid also cited the hacking of the Democratic National Committee by suspected Russian actors. The hackers gained access to internal Democratic Party information and staff emails, portions of which were made public by WikiLeaks on the eve of the party's convention.

The DNC is supposed to remain neutral during party primaries but the Sanders campaign repeatedly accused the DNC of putting a thumb on the scales to benefit Clinton in behind-the-scenes politicking.

The FBI has said it is likely the hack of Democratic Party groups extended well beyond the DNC and could have included the Democratic Congressional Campaign Committee, the Democratic Governors Association and individuals on the Clinton campaign.

Reid said the FBI should look into the full scope of the hacking and make its findings public before the election.

"The American people deserve to have a full understanding of the facts from a completed investigation before they vote this November," Reid said.

U.S. News // 6 minutes ago
Eric Adams, Curtis Sliwa clash over vaccine mandate in 1st NYC mayoral debate
Oct. 21 (UPI) -- The two men who are running to replace Bill de Blasio as mayor of New York City squared off in their first debate on Wednesday night, and clashed over the city's COVID-19 vaccine mandate.

U.S. News // 1 hour ago
CDC panel to vote on whether to authorize Moderna, J&J COVID-19 boosters
Oct. 21 (UPI) -- An advisory panel of the CDC is scheduled to vote Thursday whether to authorize booster doses of COVID-19 vaccines from Moderna and Johnson & Johnson, which would be a final step in the process. 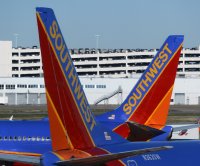 U.S. News // 1 hour ago
Southwest says it lost $75 million over flight cancellations this month
Oct. 21 (UPI) -- Several days of delays and cancellations earlier this month ended up costing Southwest Airlines $75 million, the carrier showed in its earnings report on Thursday.

U.S. News // 2 hours ago
AG Merrick Garland expected to be asked about Texas abortion fight in House hearing
Oct. 21 (UPI) -- Attorney General Merrick Garland will testify in Congress Thursday at a hearing that's expected to include questions about the Justice Department's track on prosecuting hundreds of people for the Jan. 6 Capitol attack.

U.S. News // 8 hours ago
U.S. calls for sustained, substantive talks with North Korea
Oct. 21 (UPI) -- The U.S. ambassador to the United Nations said it was time for North Korea to halt its belligerent behavior and engage in "substantive and substantive dialogues" toward denuclearizing the Korean Peninsula.

U.S. News // 10 hours ago
NTSB recovers fire-damaged flight recorders from Texas plane crash
Oct. 20 (UPI) -- Officials with the National Transportation Safety Board investigating the crash of a Boston-bound plane said that they have retrieved the flight recorders and have begun to interview passengers, crew and witnesses.