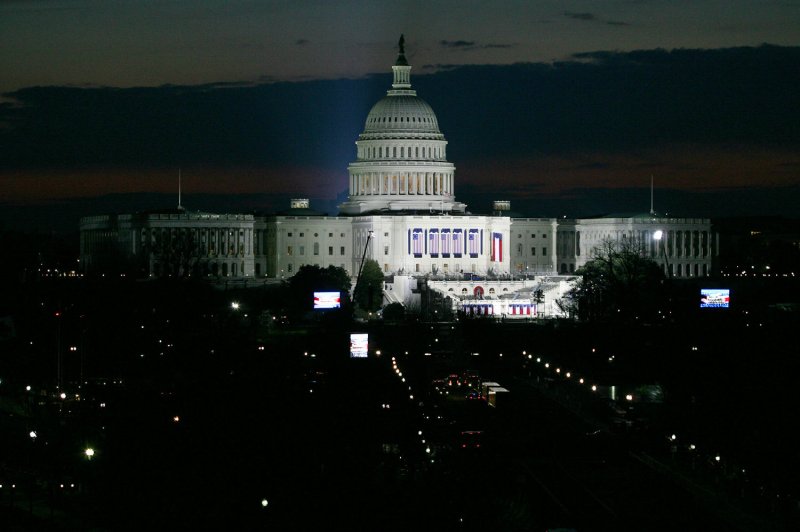 The Capitol dome is illuminated at night. Some 200 Democratic lawmakers had their personal information hacked and posted online, including personal cellphone numbers, by suspected Russian spies. File photo by Arianne Teeple/UPI | License Photo

The information released by the hacker persona known as "Guccifer 2.0" did not come from the DNC this time, but another party campaign arm, the Democratic Congressional Campaign Committee, which coordinates races in the House of Representatives.

Unlike the last time, this data dump did not include any embarrassing bombshells like the internal DNC emails released on the eve of the Democratic National Convention, which showed staff members at the supposedly neutral DNC openly attempting to influence the race in favor of Hillary Clinton over her opponent, Sen. Bernie Sanders. Those emails caused the DNC's chair, Rep. Debbie Wasserman Schultz, along with several top aides, to resign.

In releasing the documents, the hackers, who U.S. intelligence officials believe are backed by the Russian government, said there is still more information to be made public.

"It's time for new revelations now," the hacker wrote in posting the files. "All of you may have heard about the DCCC hack. As you see I wasn't wasting my time! It was even easier than in the case of the DNC breach."

Intelligence officials told congressional leaders and lawmakers on the House and Senate intelligence committees this week the hacking extended well beyond just the DNC, as originally reported. Officials now believe hackers cast a much wider net, including the DCCC, the Democratic Governors Association and members of Hillary Clinton's presidential campaign staff.

Democrats, however, may not be the only ones targeted, Politico reported.

The private security firm ThreatConnect analyzed data published by the website DC Leaks, saying it bore similarities to Russian hackers. They also said the individuals behind the Guccifer 2.0 persona provided reporters secure links to documents housed on the site but not yet published.

Some of the documents published by DC Leaks include emails from Republican lawmakers who were also apparently hacked, though none were of a particularly newsworthy nature.

ThreatConect said there is convincing evidence DC Leaks is affiliated with or controlled by the suspected Russian hackers working under the Guccifer 2.0 pseudonym and the GOP posts show that, at a minimum, Democrats have not been the sole targets.

U.S. News // 3 minutes ago
Virginia school reopens after teacher shot by student
Jan. 30 (UPI) -- Richneck Elementary School in Newport News, Va., is reopening Monday for the first time since a 6-year-old student there brought a gun to school and shot a teacher inside a classroom.

U.S. News // 8 minutes ago
Sixth Memphis officer relieved of duty -- but not fired -- in Tyre Nichols case
Jan. 30 (UPI) -- Memphis Police confirmed on Monday that it relieved a sixth officer of duty connected to a traffic stop that eventually led to the death of motorist Tyre Nichols earlier this month.

U.S. News // 1 hour ago
Ford slashes cost of EVs as it plans to boost production of Mustang Mach-E
Jan. 30 (UPI) -- Ford announced Monday it is reducing the prices of electric vehicles to "remain competitive in the marketplace," following on the heels of price reductions by EV leader Tesla.

U.S. News // 2 hours ago
Biden to attend launch of Baltimore tunnel replacement project
Jan. 30 (UPI) -- President Joe Biden will travel to Maryland for the launch of a project which will help ease one of the largest rail bottlenecks in the northeast corridor.

U.S. News // 2 hours ago
TravelCenters of America to install EV chargers
Jan. 30 (UPI) -- The amount of infrastructure needed to keep pace with the growing number of electric vehicles on the road is expanding.

U.S. News // 2 hours ago
U.S. braces for winter storm across country, leaving ice and flooding
Jan. 30 (UPI) -- From the Rocky Mountains to the East Coast, the United States will be hit with a wintery storm system that could usher in flooding in the South and snow in the North.

U.S. News // 2 hours ago
Congress to grill TikTok on list of concerns from spying to child safety
Jan. 30 (UPI) -- The CEO of TikTok will testify before Congress to address concerns surrounding the social media app's links to the Chinese Communist Party and its impact on children, the House Energy and Commerce Committee announced.
Advertisement