The newspaper argues that the letter makes "an Iranian bomb and military conflict more likely." 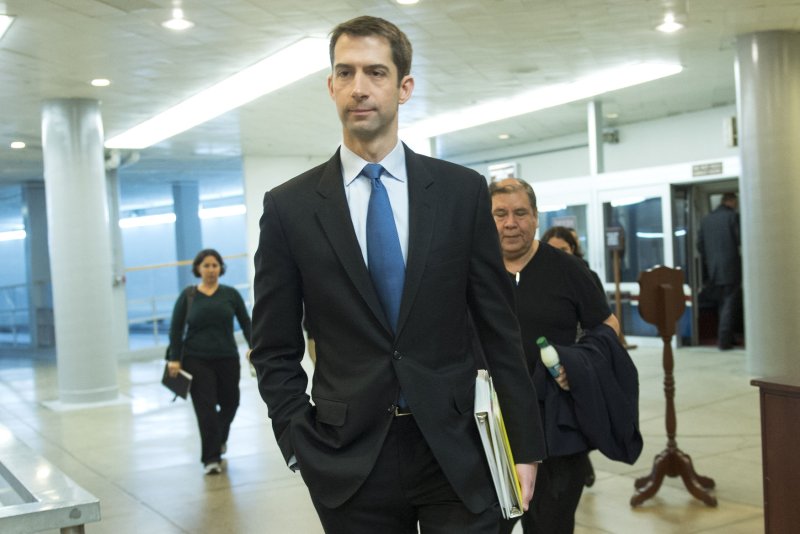 Sen. Tom Cotton (R-AR) walks to the Senate Chambers on Capitol Hill in Washington, D.C., March 10, 2015. Cotton, along with 46 other Republican senators, signed a letter to Iranian leaders informing them that any nuclear deal reached with President Obama would be tossed out when a new president takes office. Photo by Kevin Dietsch/UPI | License Photo

NEW YORK, March 12 (UPI) -- An editorial published by the New York Times Wednesday -- representing 19 executives and journalists at the newspaper -- kept the pressure on 47 Senate Republicans for a letter they signed earlier this week that warned Tehran against striking a nuclear deal with the United States and five allies without congressional approval.

The Times, which is sometimes accused of being a largely Democratic publication, accused the senators of foolishly following a young junior senator with no foreign policy experience into such a sensitive diplomatic fight.

"It was a blatant, dangerous effort to undercut the president on a grave national security issue by communicating directly with a foreign government," the Times editorial said.

Arkansas Sen. Tom Cotton, the youngest member of the Senate, drafted the open letter to Iran's government Monday. In it, Cotton warned Tehran against accepting any U.S. deal without congressional approval. The White House, along with leaders of five ally nations, wants Iran to dial down its nuclear program in exchange for lifting certain sanctions on the Middle East nation.

RELATED Republicans who signed Iran letter may pay with votes

Cotton's letter, which represents an unprecedented congressional intrusion into an executive-level diplomatic affair, emphasized the importance that Congress plays in any agreement -- and explicitly said whoever sits in the White House after President Barack Obama can scrap any deal "with the stroke of a pen."

All but seven members of the GOP's senior Senate leadership, plus Louisiana's Republican governor, signed the letter. The White House, most Democrats and many Americans immediately expressed shock and outrage by the senators' unsolicited contribution to the negotiations.

Wednesday, the Times board joined the critics in the editorial titled, "Republican Idiocy on Iran."

"Besides being willing to sabotage any deal with Iran (before they know the final details), these Republicans are perfectly willing to diminish America's standing as a global power capable of crafting international commitments and adhering to them."

The Times also noted that Sen. John McCain, R-Ariz., a former Republican nominee for president, signaled Wednesday that he might now regret putting his name to that letter.

"Maybe that wasn't exactly the best way to do that," McCain told Fox News.

"Maybe Mr. McCain, who is chairman of the Senate Armed Services Committee, should have thought about the consequences before he signed the letter," the Times continued. "Instead of trying to be leaders and statesmen, the Republicans in Congress seem to think their role is outside the American government, divorced from constitutional principles, tradition and the security interests of the American people."

An avalanche of criticism, though, has already preceded the Times' opinion. Several U.S. citizens from across the nation have already voiced their disdain in letters to the editors of various newspapers.

Vice President Joe Biden has also issued a scathing assessment of the letter, saying in his 36 years in the Senate he couldn't "recall another instance in which senators wrote directly to advise another country -- much less a longtime foreign adversary." Biden said he was "offended" by the senators' disregard for diplomacy in this case.

Cotton, in an interview with Fox News Wednesday, said Biden didn't feel that way when he himself was a senator.

"For [the] 36 years Joe Biden was a senator, he often weighed in very eloquently in defense of the Senate's prerogative in protecting the United States from a bad deal," he said. "I'm disappointed that... Vice President Biden has changed his tune."

Advocates of a deal say it keeps Iran's nuclear program on a peaceful track. But opponents say it strengthens Iran's potential to make weapons because it leaves Tehran's nuclear infrastructure operating.

"The best and only practical way to restrain Iran from developing a bomb is through negotiating a strict agreement with tough monitoring," the Times said. "In rejecting diplomacy, the Republicans make an Iranian bomb and military conflict more likely."

Prior to the letter's release, it was believed by some that Congress may have already had enough Democratic support to mandate congressional approval of any deal. Now, the Times said, lawmakers who might have voted that way are having second thoughts.

The newspaper said the primary responsibility of the board is "to write The Times's editorials, which represent the voice of the board, its editor and the publisher."

However, the Times hasn't been the only media outlet to condemn the letter. In a sarcastic piece by web magazine Slate, the hardline Council of Guardians wrote their own "open letter" to the 47 Republican signees.

"Sen. Cotton, like many of our young militiamen, served in combat in Iraq and believes that he is an instrument of God," it said. "He reminds us of the young men who seized your embassy here in 1979, two years after he was born. Those brave young revolutionaries did not wait for guidance from their elders.

"In your country's three most recent elections, which together produced your Senate's entire current membership, the other party's nominees won 5 million more votes than yours did. Nevertheless, you control the chamber. The true will of the people, as you know, is to follow those of us who understand what is best."

The faux letter criticizes Republicans by demonstrating supposed similarities between the GOP and Iran's hardline elements.

The letter concluded with a pseudo pledge to adhere to the senators' letter and quips about other controversial contemporary American issues.

"Prompted by your letter, our council has decided to end the talks with your secretary of state and dismiss nuclear inspectors from our country," it said. "We look forward to working with you in the future on other matters of common interest, such as prayer, capital punishment, and troops in Iraq."