ASBURY PARK, N.J., Nov. 8 (UPI) -- The stakes for same-sex marriage legalization in New Jersey have been raised with the election of a Republican governor, advocates say.

The defeat of Democratic incumbent Jon Corzine, who supported same-sex marriage in the state, and the election of Republican Chris Christie, who opposes it, has placed the focus on the upcoming lame-duck legislative session, which has now emerged as probably the last chance to vote on the issue for four years, The (Newark, N.J.) Star-Ledger reported Sunday.

"After the lame-duck session I think we're confident you're not going to see same-sex marriage brought up," Brian Brown, executive director of the anti-same-sex marriage group the National Organization for Marriage, told the newspaper. "Because Christie said he would veto it."

Same-sex marriage backer Garden State Equality has used Christie's election to galvanize supporters, holding a dozen strategy sessions across the state, while opponents such as the National Organization for Marriage are spending hundreds of thousands of dollars on ad campaigns aimed at defeating any legislation, the newspaper said.

U.S. News // 10 hours ago
U.S. sanctions 3 Lebanese businessmen, tourism company for aiding Hezbollah
Jan. 18 (UPI) -- The Biden administration on Tuesday blacklisted three Lebanese men accused of being financiers for Hezbollah and a tourism company they own and operate. 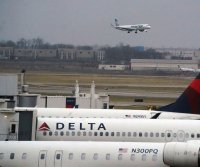 U.S. News // 14 hours ago
Justices debate Spanish vs. California law in Nazi-looted art case
WASHINGTON, Jan. 18 (UPI) -- The fate of a Pissarro painting estimated at $40 million rests in the hands of the Supreme Court after justices heard oral arguments Tuesday in a long-running case concerning ownership of the painting.