How the U.S. is outsourcing border enforcement to Mexico

By Luis Gomez Romero, The Conversation 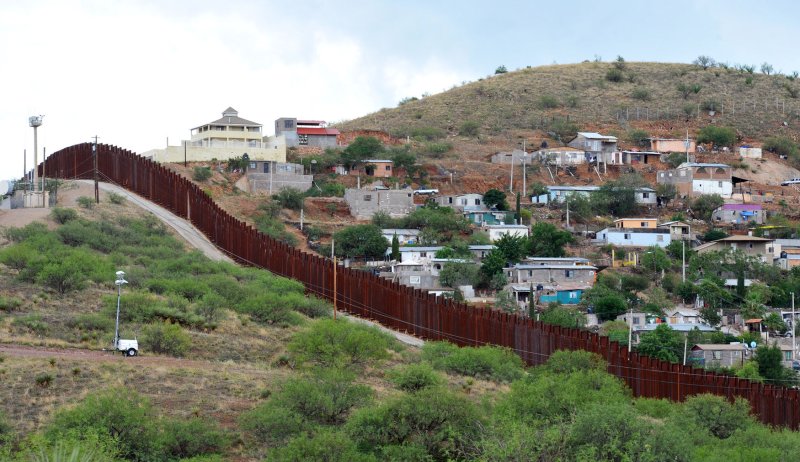 The border fence between the United States and Mexico near Nogales, Ariz. More than 57,000 children from Central America crossed the U.S. border alone between Oct. 1, 2013 and July 13, 2014. File Photo by Art Foxall/UPI | License Photo

In describing the complex relationship between the two countries, Jeffrey Davidow, American ambassador to Mexico from 1998 to 2002, spoke of "the bear and the porcupine". The United States is an arrogant bear, brawny and insensitive to Mexico's concerns. Mexico is a resentful porcupine, paranoid about American plots to undermine its sovereignty.

Davidow candidly noted that the bear could crush the porcupine, but every time it has tried to, the porcupine's sharp spines have hurt the bear's big paws.

This analogy remains pertinent. During his presidential campaign, Donald Trump strategically chose Mexico and Latin America as his straw men, characterizing Mexican immigrants as rapists and drug dealers, threatening to build a border wall and capping off his win by confirming plans to deport up to 3 million undocumented Latino migrants.

In this contemporary parallel of Davidow's comparison, the evil porcupine keeps injuring the trusting and innocent bear. But in truth, for the last few years, the porcupine has been doing the bear a big favor by guarding its expansive lair.

All the attention on Mexico's northern border and U.S. immigration policy has overshadowed ongoing violence and deportations related to migrants who have crossed Mexico's southern border with Guatemala and Belize.

These have seen a sharp rise since 2014, when the Mexican government announced the implementation of the Programa Frontera Sur (Southern Border Program). The policy's key declared objectives were to bring order to migration into Mexico's southern region while protecting the human rights of migrants who enter and travel through the country.

Mexico decriminalized undocumented entry into its territory in 2008. Yet it has also increased patrols throughout areas where migrants travel and conducted controversial raids, which human rights organizations have described as hunting parties, to detain migrants in remote places.

Enforcement has changed migration routes but hasn't deterred migrants. Instead, the Southern Border Program has dispersed them, making them more vulnerable to extortionists, rapists and thieves.

Children, sent away by desperate parents trying to get them away from gang violence, are among the most affected groups. In 2014, 18,169 migrant children were deported from Mexico. This represents a 117 percent increase from the 8,350 returned to Central America in 2013.

Children not immediately deported are locked up in detention centers. From January 2015 to July 2016, 39,751 unaccompanied minors were "secured" by Mexican authorities.

The United States has enthusiastically greeted Mexico's new immigration policies. In January 2015, U.S. President Barack Obama celebrated "strong efforts by Mexico, including at its southern border" that had helped reduce Central American migration into the United States "to much more manageable levels."

From an instrumental standpoint, Obama's praise makes sense. In 2014, some 69,000 unaccompanied children were stopped at the U.S. border. The resulting humanitarian crisis was an embarrassing public relations mess.

Thus, Mexico's detention and expulsion of immigrants who travel through it en route to the United States is beneficial. Once immigrants cross the U.S. border, it's American money and effort that's spent on returning them.

In short, the United States has outsourced border control. Trump's rants against sending American jobs to Mexico aside, the president-elect may be pleasantly surprised to learn that Obama persuaded Mexico to take over the task of stopping migrants.

In practice, this means that the Mexican-American border has shifted 1,864 miles south. It now passes through the southern states of Chiapas, Oaxaca and Veracruz, where Mexico is narrowest and the traffic of immigrants is easier to control (here's an interactive map).

According to the American Border Patrol, between October 2014 and February 2015, apprehensions of unaccompanied migrant children decreased 42 percent over the previous year. On the flip side, Mexico's National Human Rights Commission reported a substantive increase in migrant complaints against the authorities in the year after the Southern Border Program was implemented.

Today, most of Mexico has become an extension of the U.S. border region. As intellectual Sergio Aguayo has argued, on immigration matters, Mexico is "a servant of the U.S.".

Or in Davidow's framing, the porcupine deploys its spines to protect the bear.

This is the paradoxical reality behind Trump's hyperbolic vision of America's border area.

A week after the American election, the Mexican government announced an 11-point plan to assist Mexicans in the United States, who migrated both legally and illegally, with accurate information on possible changes to immigration policy.

"These are uncertain times," said Secretary of Foreign Relations Claudia Ruiz Massieu in a Twitter video, speaking directly to immigrants. "The government of President Enrique Peña Nieto and all Mexicans are with you. We are going to be closer than ever".

Mexico's measures include a 24-hour hotline that will allow people to report harassment and immigration raids, and the expansion of deportation-defense work at the Mexican Embassy and 50 consulates.

The mildness of these measures starkly contrasts with the brutality of Trump's projected policies. As Univision reporter Jorge Ramos has pointed out, the government of Peña Nieto, paralyzed by fear, has seemingly decided to kneel before Trump.

The financial, diplomatic and commercial consequences of the coming era cannot be addressed through tweets or hotlines.

For 20 years, a group of women from La Patrona, Veracruz, has been feeding thousands of Central American migrants. Each day, "Las Patronas", the (lady) Bosses, stand a few yards away from the train – known as "La Bestia" (The Beast) – that transports Central American immigrants through Mexican territory. When they hear the train's whistle, they toss drinks, tortillas and beans to the hungry migrants.

These women offer a powerful human rebuke to Mexico's policies toward vulnerable travelers, who, after all, have grown up and lived in the same rough and violent conditions that compel Mexicans to journey northward. Their basic act of decency is an ethical revolution; people do not surrender as easily as governments do.

With El Salvador, Honduras and Guatemala structuring a common strategy to face the challenges of a Trump presidency, Mexico has the opportunity to ally with its neighbors and render Trump's wall useless by improving quality of life in the region.

The first step is to acknowledge the importance of social and economic rights, such as education or health services, in deepening democracy and fighting inequality. Other provisions in the Central American strategy include improving security while respecting human rights and strengthening Mexico's relations with Latin American countries.

If Mexico's government is not up to the challenge, (as its harshness with migrants and mildness toward Trump suggest), then Mexican citizens can nonetheless follow las Patronas' example. Many Mexican academic institutions, including the Colegio de la Frontera Norte and civil society groups, such as the Tabasco-based migrant refuge "La 72", are responding to the Central America border crisis with calls for rights-based immigration policies. Together, Mexicans can exercise the dignity of saying "no" – both to Trump, the bully to the north, and to Peña Nieto, their very own American pawn.

Such efforts support George Orwell's assertion that "if men would behave decently the world would be decent". Las Patronas tell a tale more radical than that of the porcupine and the bear, which is that even when governments are indecent, nobody can prevent the people from embracing decency.

Luis Gómez Romero is a senior lecturer in human rights, constitutional law and legal theory at the University of Wollongong in New South Wales, Australia.