The Miami Dolphins continue to be linked to a potential trade for Houston Texans quarterback Deshaun Watson, despite their first-round selection of quarterback Tua Tagovailoa (pictured) in the 2020 NFL Draft. File Photo by Matthew Healey/UPI | License Photo

Sources told Houston's SportsTalk 790 AM, The Athletic and the Houston Chronicle earlier this week that the Dolphins and Texans were discussing a deal that would send Watson to Miami. Miami's interest in Watson also was reported this off-season.

Watson requested a trade this off-season and was inactive for each of the Texans' first six games. He needs to waive his no-trade clause to facilitate a move.

The three-time Pro Bowl selection also faces 22 active civil lawsuits related to sexual misconduct and sexual assault allegations. Watson denies any wrongdoing, but is being investigated by the Houston Police Department, the FBI and the NFL.

No charges have been filed against Watson and he is not suspended by the NFL.

On the field, Watson is widely recognized as one of the best quarterbacks in the league. He has thrown for a league-high 4,823 yards, completed a career-high 70.2% of his passes. He threw 33 touchdowns and seven interceptions in 16 starts in 2020.

For his career, Watson has a 67.8% completion percentage with 104 touchdowns and 36 interceptions. He is 28-25 in four seasons as a starter.

Sources told ESPN, The Athletic and the Chronicle earlier this year that the Texans want at least three first-round picks and two or three additional assets in exchange for the quarterback.

Tagovailoa completed 33 of 47 passes for 329 yards, two scores and an interception in the Dolphins loss to the Jacksonville Jaguars on Sunday in London. His missed his three previous starts with a rib injury.

Tagovailoa completed 64.1% of his throws for 544 yards, three scores and two interceptions in his first three games this season.

Tagovailoa signed a four-year, $30.2 million rookie contract with the Dolphins in 2020. The deal includes a fifth-year option for 2024.

The Texans signed Watson to a four-year, $160 million contract extension in 2020. That pact averages $40 million per season and $111 million in guarantees, but includes a potential opt out before the 2024 season.

The NFL trade deadline is Nov. 2.

"I think his preparation, the way he practices and the way he performs has been good," Flores said. "I thought he played very well last week.

"He was out for a couple games, a few games, and he came back and played very well. So, I think his psyche is in a good place. He's a confident kid, he's a tough kid."

The Dolphins host the Texans on Nov. 7 in Miami Gardens. 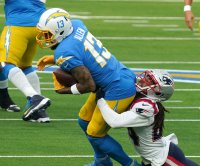 NFL // 17 hours ago
Vikings' Thielen, Ravens' Humphrey, Raiders' Drake among injured in NFL's Week 13
Dec. 6 (UPI) -- Adam Thielen of the Minnesota Vikings, Marlon Humphrey of the Baltimore Ravens and Kenyan Drake of the Las Vegas Raiders are among the top players who sustained significant injuries in Week 13 of the 2021 NFL season. 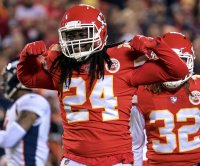 NFL // 20 hours ago
Chiefs defense sparks win over Broncos
Dec. 6 (UPI) -- The Kansas City Chiefs defense forced three turnovers, including an interception returned for a touchdown, to spark a 22-9 win over the Denver Broncos. The win helped the Chiefs hang on to first place in the AFC West. 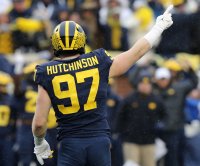