Sept. 28 (UPI) -- Dak Prescott threw three passing touchdowns to lead the Dallas Cowboys to a 41-21 blowout win over the Philadelphia Eagles in the final game of Week 3.

Prescott completed 21 of 26 passes for 238 yards in the lopsided NFC East victory Monday at AT&T Stadium in Arlington, Texas. The win pushed the Cowboys (2-1) into first place in their division.

"That was fun," Prescott told reporters. "I think that showed the brotherhood and culture we are creating with our team. That's just one step and a building block for what we are trying to accomplish."

Cowboys running back Ezekiel Elliott picked up 116 yards from scrimmage and two scores on 20 touches.

"100 yards is cool, but the win is everything," Elliott said. "A division win in our home opener. You can't beat it."

The Cowboys held the Eagles to 64 rushing yards and edged their divisional rivals by nearly 10 minutes in time of possession. They intercepted Eagles quarterback Jalen Hurts twice.

The Cowboys jumped out to a 7-0 lead when Elliott ran for a one-yard score on the game's first possession. The Eagles tied the game when Fletcher Cox recovered a fumble in the end zone five minutes into the first quarter.

The Cowboys responded with 20 unanswered points to take control of the game.

Prescott connected with tight end Dalton Schultz for a 19-yard touchdown on the Cowboys final drive of the first quarter.

The Cowboys put together a 13-play, 65-yard drive on their next possession. Elliott ran for a three-yard score to end that drive. The Cowboys held a 20-7 lead at halftime.

Hurts threw an interception on the third snap of the third quarter. Cowboys rookie cornerback Trevon Diggs returned the interception for a 59-yard touchdown.

The Eagles answered three drives later when Hurts threw a three-yard touchdown pass to tight end Zach Ertz, which cut the deficit to 13 points. The Cowboys responded with touchdowns on back-to-back drives to push the advantage back to 27.

Prescott threw a two-yard touchdown toss to wide receiver Cedrick Wilson with 11:26 remaining. He threw a 22-yard touchdown pass to Schultz on the next drive to push the lead to 41-14.

The Eagles scored the final points of the game when Hurts connected with Greg Ward for a 15-yard touchdown with 3:09 remaining.

Hurts completed 25 of 39 passes for 326 yards, two scores and two interceptions. He led the Eagles with 35 rushing yards.

The Dallas Cowboys' Dalton Schultz scores on a 19-yard reception against the Philadelphia Eagles at AT&T Stadium in Arlington, Texas, on Monday. The Cowboys won 41-21. Photo by Ian Halperin/UPI | License Photo

NFL // 7 hours ago
D'Ernest Johnson runs wild in spot start, leads Browns over Broncos
Oct. 22 (UPI) -- D'Ernest Johnson took advantage of a last-minute start, running for 146 yards and a touchdown and leading the Cleveland Browns to a win over the Denver Broncos in the first NFL game of Week 7. 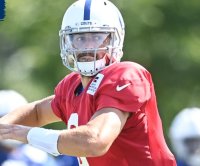