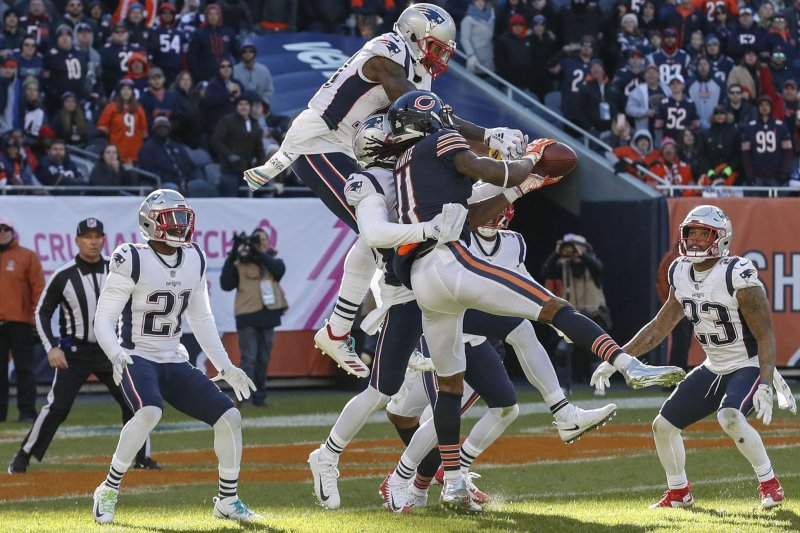 Chicago Bears wide receiver Kevin White (11) is defended by New England Patriots players during the second half on Sunday at Soldier Field in Chicago. Photo by Kamil Krzaczynski/UPI | License Photo

Chicago Bears quarterback Mitchell Trubisky (10) rushes with the ball against the New England Patriots during the first half at Soldier Field in Chicago on Sunday. Photo by Kamil Krzaczynski/UPI | License Photo

New England Patriots wide receiver Cordarrelle Patterson (84) runs with the ball to score a touchdown against the Chicago Bears during the first half at Soldier Field in Chicago on Sunday. Photo by Kamil Krzaczynski/UPI | License Photo

Chicago Bears wide receiver Anthony Miller (17) is unable to catch a pass against New England Patriots defensive back J.C. Jackson (27) during the first half at Soldier Field in Chicago on Sunday. Photo by Kamil Krzaczynski/UPI | License Photo

New England Patriots quarterback Tom Brady (12) looks to pass the ball against the Chicago Bears during the first half at Soldier Field in Chicago on Sunday. Photo by Kamil Krzaczynski/UPI | License Photo

Oct. 22 (UPI) -- Kevin White snagged a Hail Mary at the one-yard line, falling just short of a game-tying score in the Chicago Bears' loss to the New England Patriots.

The Bears trailed the Patriots 38-31 with two seconds remaining in the loss on Sunday at Solider Field in Chicago. Bears quarterback Mitchell Trubisky lined up at the 45-yard-line for the final play of the game.

Trubisky took the shotgun snap and launched the ball about 60 yards through the air, where White stood near the left hashmark. The Bears playmaker jumped in front of four Patriots defenders and grabbed the football at about the 3-yard-line. He turned around and attempted to jump into the end zone, but was denied and eventually brought down by a group of Patriots players.

After the game, Bears coach Matt Nagy told reporters that he didn't know if he would have gone for a two point conversion or kicked an extra points, had the Bears scored on White's catch.

"But it looked close, and I just saw him go up, and I saw him catch the ball, and I just couldn't tell exactly where he was, how he came down, what the extra effort was, and then you could see on tape we were just a little short. In a perfect world you'd love to get into the end zone for that, but we were a little far away, again, into the wind, the throw, and he got a little pressure in front of him. So all those things combined, it's unfortunate. I mean, you saw it -- so I just got done saying, everything that happened to us, everything that I just said, and we were a yard away from tying the game. So that I can that and think about that for a little bit."

Trubisky said he thought White was in the end zone.

"We were that close," Trubisky said. "It was like one yard, two yards away. It was a great effort by Kevin and the rest of the guys, especially up front, just giving me time to be able to chuck that down there, so yeah, never give up mentality, it was real close. There's a bunch of -- it's never one play. There's a bunch of -- there's a culmination of plays throughout the game that made the difference, and we've just got to find those plays, make sure we improve on them, be hard on ourselves in the film room and make sure we get better this week."

White had 64 yards on two catches in the loss. Trubisky completed 26-of-50 passes for 333 yards, two scores and two interceptions for the Bears. 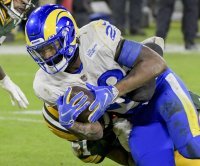