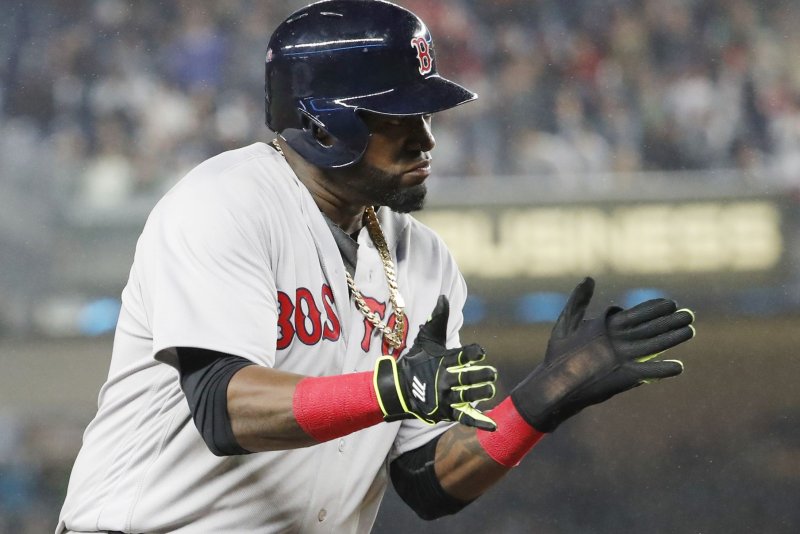 Boston Red Sox legend David Ortiz will be among the legends inducted into the National Baseball Hall of Fame on Sunday in Cooperstown, N.Y. File Photo by John Angelillo/UPI | License Photo

The ceremony, which will feature a crowd of baseball legends and speeches from the latest inductees, will air at 1:30 p.m. EDT on MLB Network. Ortiz was the only player in the class elected in January by the Baseball Writers Association of America.

Ortiz, 46, spent 14 of his 20 MLB seasons with the Red Sox. The 10-time All-Star, three-time World Series champion and former World Series and ALCS MVP hit a league-high 48 home runs and drove in 127 runs in his final season in 2016.

Olivia, 84, was the 1964 Rookie of the Year. The former outfielder was an eight-time ALL-Star and three-time batting champion. He spent his entire 15-year career with the Minnesota Twins.

Kaat, 83, played 25 seasons and played for five different teams. The left-handed pitcher was a 16-time Gold Glove winner and three-time All-Star. He also was on the 1982 St. Louis Cardinals World Series team.

Minoso, who died at 91 in 2015, was a nine-time All-Star. In 1951, the former outfielder and third baseman became the first Black Cuban to play for the White Sox.

He started his baseball career in the Negro Leagues, where he first became an All-Star for the New York Cubans. Minoso also spent time with the Cleveland Indians and St. Louis Cardinals.

He totaled 13 All-Star selections, was a three-time Gold Glove winner and won a title in 1947 with the Cubans.

Hodges, who died at 47 in 1972, was an eight-time All-Star, three-time Gold Glove winner and two-time World Series champion. The 18-year veteran was a first baseman and outfielder for the Brooklyn Dodgers, Los Angeles Dodgers and New York Mets.

He also managed the Mets to the 1969 World Series title.

Fowler, a former pitcher, catcher, infielder, outfielder and manager, died at 54 in 1913. He is recognized as the first Black player in professional baseball, which he achieved in 1878.

O'Neil served as a player, coach, manager, scout and executive over an eight-decade baseball career. He spent his entire career in the Negro Leagues, where he was a three-time All-Star and won the 1942 title with the Kansas City Monarchs.

Carlos Beltran, Matt Cain, Jacoby Ellsbury, Andre Ethier, Francisco Rodriguez and Jayson Werth are among the players who will be eligible for the 2023 Hall of Fame class.

Alex Rodriguez, Gary Sheffield, Andruw Jones, Manny Ramirez and Andy Pettitte are among the players who will return to the ballot.

MLB // 16 hours ago
Pirates' Rodolfo Castro loses phone during slide into third base
Aug. 10 (UPI) -- Pittsburgh Pirates infielder Rodolfo Castro's phone flew out of his pants pocket as he slid into third base during a game against the Arizona Diamondbacks, creating a rare sequence and leading to a talk with his manager.

MLB // 2 days ago
Longtime Red Sox broadcaster Dennis Eckersley to leave booth
Aug. 8 (UPI) -- Baseball great Dennis Eckersley, who spent a combined five decades as an MLB pitcher and broadcaster, will end his tenure as a color commentator for the Boston Red Sox at the end of the 2022 season, he announced Monday.

MLB // 6 days ago
Traded Brandon Drury hits grand slam in first pitch with Padres
Aug. 4 (UPI) -- Brandon Drury needed one pitch to make a huge impact in front of his new San Diego Padres teammates. The designated hitter, who was traded this week, smacked the offering to left field for his second career grand slam.
Advertisement