BOSTON -- Had things worked out differently, Noah Syndergaard would be pitching four or five times a season against the Boston Red Sox.

But on Dec. 12, 2012, the Toronto Blue Jays, in the American League East with Boston, included the former first-round draft pick in a mega deal to the New York Mets that brought defending Cy Young Award winner R.A. Dickey to Canada.

Friday night, Syndergaard makes the second appearance of his major league career against Boston when he tries to cool off the sizzling Red Sox in the opener of a three-game series at Fenway Park.

Thursday night, the Red Sox finished off a three-game sweep of Syndergaard's old team with a 4-3 win at Fenway, Boston's 101st victory of this special season. They reduced their magic number for clinching the East to six over (the New York Yankees were idle Thursday).

The Red Sox, who finished 15-4 against Toronto, are 101-46 and need just five wins in their last 15 games to break the franchise record for victories.

J.D. Martinez hit his 41st homer and Craig Kimbrel earned his 40th save Thursday, making him the fourth pitcher with five 40-save seasons.

Hector Velazquez, who has been an invaluable utility man on the Boston pitching staff, makes his eighth start of the season for the Red Sox. He is 2-2 with a 4.00 ERA as a starter, 7-2 with a 3.29 overall.

In Syndergaard's last start, he was hit in the ribs with a line drive to cap a game that saw him allow 12 hits and four runs while walking five and raising his record to 11-3 (3.44 ERA). The start before that, he pitched the first complete game of his career, a two-hitter with 11 strikeouts at San Francisco.

Before Thursday's game, manager Alex Cora, addressing the uncertainty of his bullpen setting up Kimbrel, said he may well use a group effort in the postseason.

"No, I think we need versatility, guys that can match up with whoever we're facing," he said. "Fastballs up, breaking balls, slider, I think that's the most important thing. You guys saw earlier in the season how we're going with Joe (Kelly) and (Matt) Barnesy, and now that things are going this way, you see it with (Bobby) Poyner getting switch-hitters out and lefties.

"You see (Ryan) Brasier coming in in the sixth inning or pitch in the eighth. It's about who can get people out and how can we match up with whoever we play. That's the most important thing. Obviously, those decisions will happen before we play (the American League Wild Card Game) or we play the Division Series. We'll look at the matchups we like and the matchups we can exploit and we can go from there."

Boston opens a six-game New York/New York run this weekend -- the Mets in for three before the Red Sox visit the Yankees for three next week. They could clinch the division on the field of their main rivals.

The Mets come in with a three-game winning streak, including a double-header sweep of the Miami Marlins Thursday -- on the day the emotional Mets captain David Wright met the media to essentially discuss the end of his career.

Wright, who hasn't played in a game since 2016, will be activated Sept. 25 for the final Mets homestand and then start against the Marlins on the 29th. Retirement is almost certain after that because of his numerous physical problems.

"The way I feel right now and from everything the doctors have told me, there's not going to be an improvement," Wright said when asked if he could play again next season. "So, yeah, I don't see that as a possibility."

Sunday's game is set as a matchup of Chris Sale and Jacob deGrom. But Sale is slated to pitch a maximum of just three innings as he works his way back from shoulder inflammation. deGrom is the favorite to win the National League Cy Young despite his 8-9 record (1.71 ERA and little offensive support), while Sale was on track to win his first Cy in the American League before getting hurt -- twice.

Eduardo Nunez suffered a sore right knee Thursday and is considered day to day. He will not play for Boston Friday night. 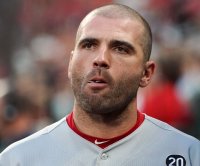