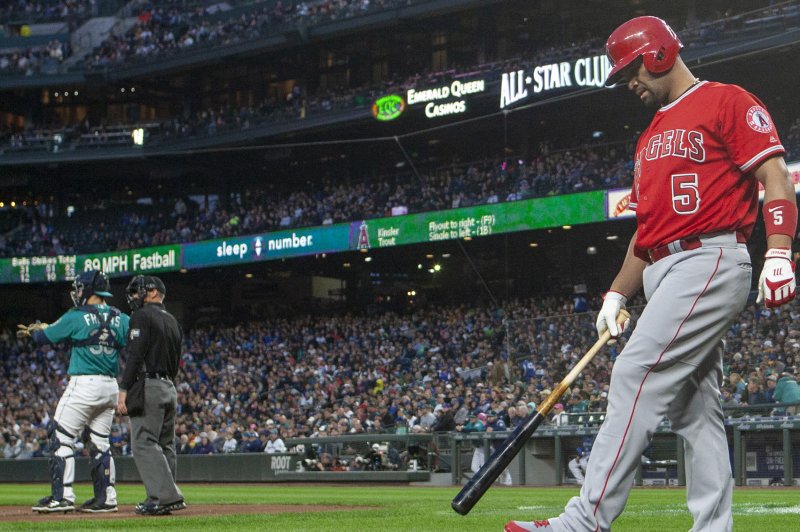 The Los Angeles Angels open a 10-game road trip Monday afternoon with a makeup game against the Kansas City Royals at Kauffman Stadium.

The game was originally rained out on April 15.

The Angels will continue east afterward and begin a three-game series against the Boston Red Sox on Tuesday night.

The Angels (41-37) have lost two straight and trail the Seattle Mariners by six games for the second wild card from the American League.

Los Angeles left-hander Tyler Skaggs is scheduled to start on the mound after he was scratched Thursday against the visiting Toronto Blue Jays because of a sore hamstring.

Skaggs (6-4, 2.81 ERA) should have good memories of Kansas City. He threw seven shutout innings in each of his two career appearances against the Royals, both on their home field.

He allowed four hits and matched his career high with nine strikeouts on April 16, 2017, but was matched by Royals starter Ian Kennedy and Kansas City eventually scored a run in the bottom of the ninth to win 1-0.

Skaggs made his first career start in Kansas City in July 2016, which also marked his first major-league game back from Tommy John surgery performed nearly two years earlier. He allowed three hits in the 13-0 win.

The Angels are 6-0 against the Royals this season, but Skaggs has not appeared in any of those games. He last pitched July 15 at the Oakland A's and did not allow an earned run in seven innings of an 8-4 win.

Skaggs is 3-0 in June with a 0.45 ERA, perhaps his best stretch since undergoing elbow surgery in August 2014.

"With Tyler, we've seen a constant growth in confidence," Angels manager Mike Scioscia told the Los Angeles Times. "This guy's worked so hard to get back to where he was and even a little above that now."

Kansas City starter Jakob Junis (5-8, 4.43) has been trending in the opposite direction, losing his past five starts.

He began the season by blanking the Detroit Tigers for seven innings in a 1-0 win on April 3 and doing the same six days later in a 1-0 win over the Seattle Mariners.

Junis then faced the Angels and was knocked out after allowing four runs and seven hits in 4 2/3 innings of a 5-3 loss in Kansas City, giving up home runs to Luis Valbuena, Justin Upton and Mike Trout.

"It's definitely been a struggle for me," he told reporters after his latest start. "I've given up a lot of home runs this year, so I'm very conscious of that. I'm trying to keep it in the ballpark, because when I do, that's when I have success."

Junis struggled even worse in his only other appearance against the Angels last June, giving up five runs and eight hits in 5 1/3 innings of a 9-0 loss in Anaheim.