By
Alan Saunders, The Sports Xchange 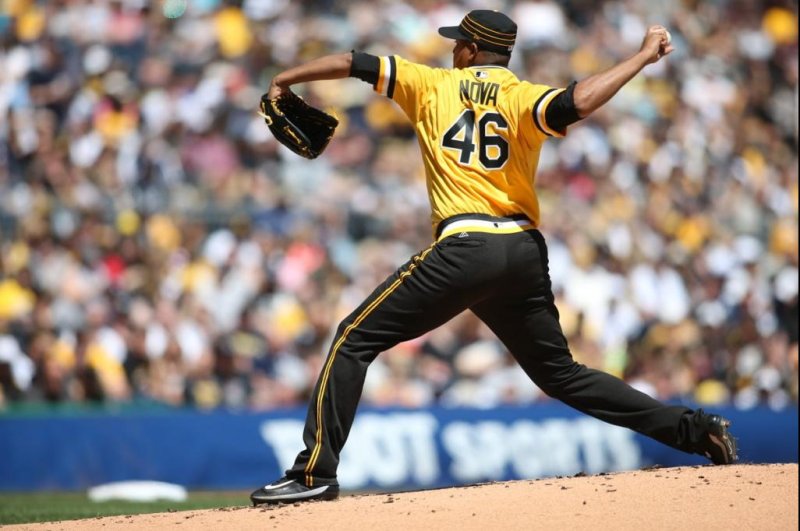 Nova (2-2) played for the Yankees from 2010 to 2016, but he has been a more dynamic pitcher since being traded to the Pirates last August. In his seven-plus innings Sunday, he allowed just four hits and one run to lower his ERA to 2.00 on the season. He struck out seven.

After the game, Nova insisted that the win was just like any other start despite it coming against his former teammates.

"Yesterday, I got the chance to go say hi to a lot of the guys," he said. "I sent somebody to go inside and tell them I was there and they were happy to see me. A lot of them came by and hugged me and everything. They knew today was game day. You just try to stay focused on the game."

Yankees manager Joe Girardi defended his club's decision to part ways with Nova, despite the right-hander's resurgence with Pittsburgh.

"I think you look at the numbers at our place," Girardi said. "He had some good years, he had some tough years. We had to make a decision. Last year at that time, we thought it was the right move to make, and we made the move and we don't look back."

The Pirates' offense did just enough to get Nova the win, despite plenty of chances.

In the first inning, Pittsburgh had the bases loaded with no outs but came away with just one run on a sacrifice fly by David Freese. Gregory Polanco added an RBI double in the third inning to snap an 0-for-15 streak. He finished the day 2-for-4.

"Nothing builds confidence like a little success," Pirates manager Clint Hurdle said, regarding a potential turnaround for Polanco. "It was big to hit the double there (after) coming up the first inning with the bases loaded. We had two bases-loaded opportunities today and we cashed in one run. That's not the way you draw it up."

The only damage against Nova came courtesy of a solo home run to right field by Jacoby Ellsbury in the seventh inning. It was the second home run of the season for Ellsbury and the second allowed by Nova.

"I mean, if you can go six innings, two runs with (a lack of top command), obviously I deserve to be here," he said. "I want to be better and pitch with my strengths."

Daniel Hudson and Tony Watson each pitched a scoreless inning in relief of Nova, with Watson recording his sixth save in six opportunities. Watson's ninth inning wasn't without drama, as a single, a walk and an error loaded the bases with one out, but Watson struck out Austin Romine and induced a groundout from Pete Kozma to secure the victory.

"That's what back-end relief pitching is all about, is keeping your focus," Watson said. "Not ideal, but in the end, it all worked."

NOTES: Yankees C Gary Sanchez (biceps) is throwing 90 feet regularly and is hitting off a tee. He is expected to start hitting in the cage soon. ... New York SS Didi Gregorius (shoulder) played six innings with Class A Tampa on Saturday. He went 1-for-3 as a designated hitter Sunday. When Gregorius returns, he will be the starting shortstop, with Ronald Torreyes spelling Gregorius and 2B Starlin Castro, manager Joe Girardi said. ... Yankees 1B Greg Bird finished the series 0-for-11 and is on an 0-for-14 streak overall. ... Pirates LHP Antonio Bastardo is dealing with a decrease in velocity and a lack of feel for his fastball that has resulted 11 earned runs in 5 1/3 innings this season. GM Neal Huntington said the team is working with him on mechanical adjustments. ... Pirates RHP Ivan Nova issued his first walk of the season while making his fourth start. New York Mets RHP Noah Syndergaard is the only pitcher to make four starts this season without walking a batter.